On Friday Botswana celebrated 50 years of independence. There has been a transformation. In 1966 it was the poor relation in the region. Some of us at the Vigil recall travelling through Botswana by train about this time, making lengthy unexplained stops in the middle of nowhere, only for someone to suddenly emerge from the semi-desert with a tortoise for sale. 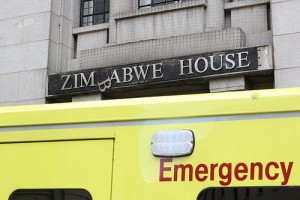 Today the tables have been turned. Itâ€™s poor Zimbabweans who emerge everywhere to sell handicrafts, wild fruit and vegetables, simcards, second hand clothes . . . soon to be joined by US dollars when the threatened bond notes appear.

Far from being the backward relatives the Batswana now have a much higher standard of living than Zimbabweans though their country has far fewer resources. The Gross Domestic Product per head of population â€“ a standard measure of wealth â€“ was $953 for Zimbabweans in 2013. The figure for Botswana was $7,315. (The figures for 2016 will no doubt be even worse for Zimbabweans.)

Why has this happened? Mugabe blames it on sanctions but the Vigil believes the simple answer is Mugabe and his rapacious elite. Robert Guest of The Economist wrote in his 2004 book, The Shackled Continent, â€˜In the last 35 years, Botswanaâ€™s economy has grown faster than any other in the world. Yet cabinet ministers have not awarded themselves mansions and helicopters â€” and even the president has been seen doing his own shopping.â€™ Commenting on this, Marian L Tupy noted in The American: â€˜Similarly, a game warden I spoke to in the Chobe National Park reminisced about standing behind the minister of education in the line for groceries. A shop manager recognized the minister and motioned her to the front of the line. She flatly refused.â€™ A far cry from Zimbabwe.

Botswana was described today as â€˜an island of peace, tranquillity and wisdomâ€™ by the writer Alexander McCall Smith in a BBC radio interview. McCall Smith has made Botswana famous abroad with wry tales of Precious Ramotswe and her No. 1 Ladiesâ€™ Detective Agency. If only he would turn his attention to Zimbabwe, where he was born. How about this plot for a farce: a High Court judge who overturns an illegal police ban on demonstrations is accused by the Chief Justice of having taken a bribe, police hover in the background as Zanu PF youth provoke violence in Harare to be blamed on demonstrators, a student leader is arrested for holding a poster asking for jobs at a graduation ceremony, people are threatened with jail for displaying the Zimbabwean flag, people abducted, tortured . . .

Too far-fetched? Not in Zimbabwe. The Mugabe regime is what the Japanese observer Ken Yamamoto would describe as a fence post tortoise: â€˜When youâ€™re driving down a country road and you come across a fence post with a tortoise balanced on top, thatâ€™s a fence post tortoise. You know he didnâ€™t get up there by himself, he doesnâ€™t belong up there, he doesnâ€™t know what to do while heâ€™s up there, heâ€™s elevated beyond his ability to function, and you just wonder what kind of dumb arse put him up there to begin with.â€™

FOR THE RECORD: 63 signed the register.Â