Gaborone – Zimbabwean President Robert Mugabe has described the late Botswana leader Sir Ketumile Masire as a "virtuous and humble" man, who "opened his life to us with a generosity of spirit that was so much a part of his character". 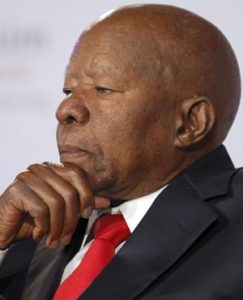 Mugabe said this while paying tribute to Masire, who died in hospital last week at the age of 91.

The late head of state was buried on Thursday in his home village, Kanye, next to his late wife.

“We come here in tears because the man we are here to bid farewell is a man who often rolled out the welcome mat to us regardless of the matter at hand.

“His ear was always willing to listen, whether the issue to be discussed was weighty or light. We came in tears because the man we have lost was virtuous and humble. I know that I’m not the only witness to the depth of character that Sir Ketumile Masire reflected, commanding respect without ever demanding it,” Mugabe said.

The Zimbabwean president and Masire shared a special bond and Mugabe frequently visited his Botswana counterpart between 1980 to 1998.

“We come in tears because we feel robbed, losing the man who lies before us, a leader who was was such an asset to us in so many ways… Sir Ketumile Masire was a dear comrade, dear brother and dear friend,” Mugabe said.

Mugabe also paid tribute to the role that Masire played during the liberation struggles of the southern region.

“The death of Sir Ketumile Masire has not only robbed Botswana of a great leader but has also deprived southern Africa and out entire continent of a great statesman, who served with valour  and honour…

“When he (Masire) took over as president of Botswana in July 1980, the liberation struggles in South Africa and Namibia were at their peak. President Masire would not be intimidated by the might of the apartheid army into submission as Botswana continued to render assistance to the liberation movements of both countries,” said Mugabe.

Mugabe said that the people of Zimbabwe would forever remember “the sterling role that the late former president Masire palayed in the liberation of our region”.

He led various diplomatic initiatives in Africa, including chairing a panel that investigated the 1994 Rwanda genocide, and co-ordinating the Inter-Congolese National Dialogue.