The Crisis in Zimbabwe (CiZC) calls on government to ensure the speedy alignment of Electoral laws to the Constitution to ensure a credible, free and fair 2018 election. 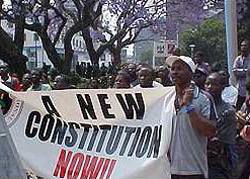 Indications by political players, social movements, civil society organisations and citizens that failure to align electoral laws to the Constitution will see Zimbabwe holding an election whose outcome will be disputed should be treated with the urgency that it deserves.

At a public meeting organised by the CiZC public series meeting held in Harare recently under the title “Of Elections in Zimbabwe, BVR, Coalitions and Factions: What is the Zimbabwe We Want Beyond 2018?”, participants expressed concern at the failure by government to align the Electoral Law to the Constitution alleging that the justice ministry was not keen on fulfilling this Constitutional mandate.

Different speakers across the political divide, representatives of CSOs, social movements and citizens highlighted the challenges experienced because of the existing scenario, where certain political parties were manipulating the existing electoral environment which fostered an unequal playing field for political players.

Traditional leaders and securocrats were fingered to be meddling in politics, a development which fuelled politically motivated violence and was contributing to voter apathy. This is despite that the Constitution in Section 67 guarantees every Zimbabwean citizen the right to join and participate in the country’s political processes as a candidate or supporter of a political party of their choice.

It is clearly evident that there is need for media reforms as a condition to foster an equal playing field for all political parties that seek to contest for political office in 2018. Just like in the past where other political players have no access to public media, Zanu Pf has intensified its propaganda through the national broadcaster and public media, a development which has the potential to see the forthcoming polls being described as not credible.

Although there is the alternative use of the new social media, the CiZC calls on government to ensure that everyone regardless of their political affiliation has equal access to the public media.

Electoral reforms will also promote the independence, transparency and accountability of the Zimbabwe Elections Commission (ZEC). It will also dispel the existing scenario which is indicating and portraying the ZEC as a captured institution.

The CiZC therefore calls on government to move with speed and align the country’s laws to the Constitution so that the forthcoming polls will have a credible outcome which no political player will dispute.

Citizens who participated at the dialogue series also expressed concern over failure by ZEC to move with speed regarding the Bio Metric Voter (BVR) registration. It is therefore imperative for Zimbabwe’s electoral body to fulfil on its Constitutional mandate.

Following recommendations from the holding of the Public Dialogue Series, the CiZC implores government to implement the following: