Zimbabweans love myths. One of the proofs is the popularity of the suave, sharply-dressed salesmen promising them everything they pray for. Like Mugabe. 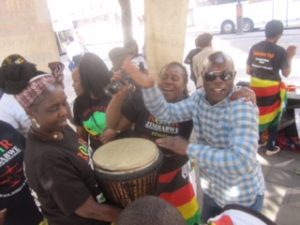 Here we bump into one of the great myths of our age: ‘Zimbabweans are the best-educated people in Africa’. If this was ever true it is surely impossible to claim this today with our run-down schools and malnourished pupils and our premier university’s two-month doctorate for Grace Mugabe.

This is not to say our people are stupid. Far from it.  Zanu PF is proof of this. Their well-oiled 2018 election strategy is already underway. It is felt everywhere. Mbare for instance is out of bounds to the MDC. Not that there is anything new in the strategy, but they have the intelligence to just go on repeating what works.

This is shown in the experience of our sister organisation Restoration of Human Rights in Zimbabwe which was given the old run-around when they applied to the police for clearance for their constitutional right to stage a peaceful demonstration in Harare at the end of May. For weeks they were made to report to Harare Central to receive clearance only to be turned down at the last minute and threatened with arrest.

Activist Linda Masarira, a member of ROHR, has posted a facebook article titled ‘The election manual: how to rig an election in an Idiocracy’. It begins: ‘Have you noticed that the ruling party is not concerned about the 2018 election? Do you often wonder why? The answer is simple, they have the election bagged!’ (See: https://www.facebook.com/lindatsungiriraimasarira/posts/712376948964776.)

The Vigil thinks the best hope for Zimbabwe is the ousting of Mugabe’s disciple President Zuma. His blatant corruption has eroded support for the ANC which may be forced to sack him. This would clear the way for a reformist South African president who would probably have little patience for genocidal geriatrics like Mugabe, whose latest anti-White rants about South Africa can only help this process (see: http://www.huffingtonpost.co.za/2017/06/03/mugabe-speaks-out-against-white-capital-in-sa-and-zimbabwe_a_22123777/).

Vigil Co-ordinator Fungayi Mabhunu agrees with Linda Masarira’s conclusion that the answer to election rigging lies with the people. He said they must be empowered to overcome the fear instilled by Zanu PF. But he has little trust in opposition politicians who he believes only want to rejoin the gravy train. ‘The way forward must be a transitional authority to take over from Zanu PF, for which the Vigil is asking for UN support,’ he said.

FOR THE RECORD: 46 signed the register.