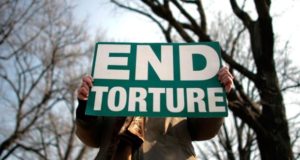 In Chapter 4, the Constitution of Zimbabwe provides that no person may be subjected to physical or psychological torture [section 53], that the right not to be tortured may not be limited by any law and that no person may violate the right [section 86(3)].  This makes the right an “absolute” or “non-derogable” right, the violation of which is never justifiable under any circumstances.  The Constitution also lays down that “the State must take all practical measures to protect the fundamental rights and freedoms in Chapter 4 and promote their full realisation and fulfilment” [section 11].

Once again, as in years past, Veritas uses this day to ask why Zimbabwe has not yet become a party to the UN Convention Against Torture and Other Cruel, Inhuman or Degrading Treatment or Punishment [CAT] in order to fully realise our constitutional right to freedom from torture.

Regrettably, nothing seems to have come of this because Zimbabwe has still neither signed nor ratified CAT.

Perhaps Parliament can take the initiative and replace its lapsed resolution of 2001 with a fresh resolution to this effect
and follow this up by demanding action.

What is the Convention Against Torture?

CAT is a United Nations convention which requires States to take effective measures to prevent torture within their territories and prohibits them from transporting or extraditing people to any country where there is reason to believe they will be tortured.  The text of CAT was adopted by consensus in the General Assembly of the UN on 10th December 1984.  The Zimbabwean delegation was present, so presumably concurred in its adoption.

CAT came into operation on 26th June, 1987, when it was ratified by the 20th member State.  Since then, the absolute prohibition against torture and other acts of cruel, inhuman, or degrading treatment or punishment has become accepted as a principle of customary international law [accepted by the international community as non-derogable right].  “Absolute” and “non-derogable” signify that—

What Does the Convention Do?

The purpose of CAT is to help combat torture and other forms of cruel, inhuman or degrading treatment throughout the world.  Torture is defined very broadly to cover severe physical or mental pain or suffering inflicted by a public official, or inflicted with the consent or acquiescence of a public official, in order to obtain information from the person on whom it is inflicted or to punish, intimidate or coerce the person, or for a similar purpose.

CAT obliges States that are parties to the Convention to do far more than merely having a brief general prohibition of torture in their Constitution.  It obliges States take all legislative, administrative, judicial and other measures to prevent acts of torture or cruel, inhuman or degrading treatment or punishment within their territories.  These measures include:

States that are parties to CAT have to report every four years to the UN Committee Against Torture on the measures they have taken to implement the Convention.  The committee is empowered to conduct confidential investigations into allegations that any member State systematically practises torture, and the committee may summarise the results of its investigations in its annual report.  Member States may also allow the committee to receive and investigate allegations from individuals and other States that they are violating CAT.

Why Zimbabwe Should Accede to CAT?

It is difficult to understand why the Government has not acceded to CAT.  The Government has much to gain from accession:  it would show itself to be an integral member of the international community and ready to co-operate with other governments in upholding universally-accepted human rights.  It would also demonstrate the Government’s willingness to implement the new Constitution and to abide by commitments previously given to the UN Human Rights Council and its own citizens.