The Zimbabwe Peace Project has noted increasing conflict in Housing cooperatives the latest of which is Kingsdale Housing Cooperative in Norton where a few residents had their houses demolished by one Cuthbert Mupami with the help of armed police. Mupami cooperation of armed police after he misrepresented to the police that he had been threatened by machete wielding residents. 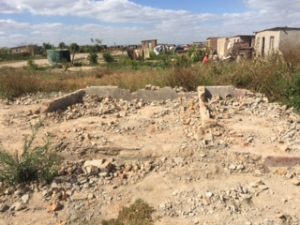 The families were targeted after they refused to pay $27 per square meter which was being demanded by Mupami, insisting on paying $5 per square meter which was agreed by members of the cooperative for the stands they are occupying and confirmed by a Constitutional Court order handed down in 2015. Those who resisted the exorbitant demands by Mupami were isolated and had their homes demolished during the night. Mupami is accused of over subscribing the housing cooperative and is now evicting some occupants to make way for others who had paid but had not been allocated land.

Zebediah Mazokera and Jane Gomwe were arrested by police and spent the night in police custody on charges of trying to obstruct the evictions. They were released after Member of Parliament Temba Mliswa facilitated a lawyer for them. Those affected lost property and were left exposed to elements of weather. The ZPP is particularly worried about the involvement of armed police in a matter that is purely civil. The fact that the demolitions were carried out under the cover of darkness is suspicious. It is also a cause of concern that police threatened to use teargas against one of the victims who was locked in her house together with a baby.

This is the second time that the ZPP has responded to housing cooperative conflict/ violence this month after another Housing Cooperative committee member in Kuwadzana 1, Paradazai Masase, sustained serious injuries after unknown assailants burnt his house.

The ZPP urges the government to restore order in the governance of Housing Cooperatives by ensuring that land barons and their functionaries are not left to their own devices. The government must also move to de-politicise allocation of housing stands as this has the potential to escalate conflict in the areas.