Many Zimbabweans who applied for asylum in South Africa say they are now scared of renewing their permits following an increase in the number of those that are arrested and deported while attempting to update them. 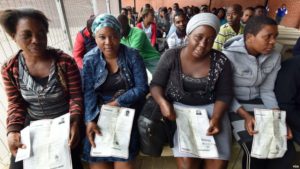 Several Zimbabweans living in that country told VOA Studio 7 that they are now scared of visiting immigration centers as they fear that they may be arrested and sent back home to face serious economic and political challenges.

Authorities are on record vowing to rid the asylum system of economic refugees who use it to regularize their stay in the country.

The government says one of the key objectives of the new immigration laws being proposed in South Africa are aimed at stopping the abuse of the asylum system by foreign nationals looking for greener pastures.

But others think the authorities could be sending Zimbabweans back home to participate in the 2018 elections.

Over 200,000 Zimbabweans are under the Zimbabwe Special Permit program. Their documents expire at the end of this year.