Harare Mayor, Councilor Bernard Manyenyeni has assured residents that the Harare City Council has terminated the contract of Wellcash Debt Collectors (Pvt) (Ltd), and as such, the residents should deal with council directly. 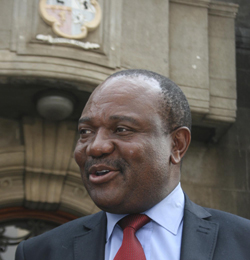 Councilor Manyenyeni was speaking during a public meeting organized by the Combined Harare Residents Association (CHRA) in the high density suburb of Rugare, Ward 30, on June 5 2017.

He said that after listening to the concerns coming from residents regarding the “brutal” operations of Wellcash Debt Collectors, council was left with no option but to terminate the debt collectors’ contract.

Wellcash Debt Collectors had been engaged by the Harare City Council to collect money owed by residents.

There was however an outcry from residents over the brutal and arrogant behaviour of the debt collectors who were also charging an extra 10 percent on top of what the residents owed to council.

In some cases, the debt collectors were not remitting the money they would have collected from residents to council.

“We have listened to the concerns coming from residents and residents’ associations and we urge residents to ensure that the amounts reflecting on their bills are the correct ones before they come to council to make payment plans. The biggest concern coming from CHRA was the issue of Wellcash Debt Collectors. We stopped them because there were complaints over their arrogant behaviour and also, the money that some residents were said to owe council was largely contested.”

Councilor Manyenyeni said it was unfair for the Harare City Council to unleash debt collectors on residents at a time the Zimbabwean economy is on its knees.

He attributed non-payment by residents to the current economic situation but urged residents to make payment plans with council.

Councilor Manyenyeni is on record saying it is misleading for city management to claim that revenue collection had significantly improved following council’s decision to engage Wellcash Debt Collectors.

On another note, Ward 30 Councilor, Peter Moyo pledged continuous engagement with residents to ensure that their concerns are addressed.