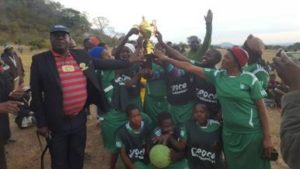 Heal Zimbabwe conducted sports for peace tournaments in Buhera and Rushinga on Saturday, 24 June 2017. The tournaments brought together youth, community members, duty bearers and community leaders. In Buhera, the sports games where held at Nechavava Secondary School and in Rushinga at Chimhanda Business Centre. About 1 200 people attended the Rushinga tournament and more than 200 the Buhera one. The youth tournaments were held under Heal Zimbabwe’s National Peace Campaign dubbed #13MillionVoices4Peace, which aims to rally Zimbabweans to commit to uphold peace ahead of the 2018 election. 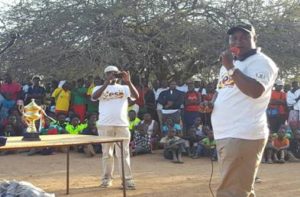 Nine soccer teams and six Netball teams drawn from 9 Rushinga Constituency zones battled for the Peace cup on the day with Chimhanda and Rushinga queens scooping the prizes in soccer and netball respectively. In Buhera, six soccer teams and four netball teams participated in the tournament. Bedza netball team and Batanai boys lifted the peace trophies.

In Rushinga, the occasion was graced by various community leaders who publicly condemned violence and encouraged peaceful coexistence ahead of the 2018 general elections. Among the leaders were the Member of Parliament for Rushinga Hon. Wonder Mashange,  Rushinga District Administrator, Mr Clever Machekera, Ministry of Sports and Recreation representative, Mr Mupfumi, 5 Councillors and 23 village heads. In Buhera, the sports tournament was attended by community leaders who include Headman Nechavava, 25 village heads, the local councillor, Mr Matsenhura and 20 WADCO members.

Community leaders took turns to pledge to uphold peace ahead of the elections. Headman Nechavava from Buhera encouraged community members especially youths to desist from engaging in political violence. “…I am happy that the youth participated in the sports tournament, I encourage you the youth not to be used by politicians to beat up your parents and engaging in violent activities. You must be peace ambassadors not peace destroyers..” said Headman Nechavava. He further called the youths to be united and ensure that they preach the message of peace in their respective communities.

In the past elections, youths have been widely abused and incentivised by politicians to engage in violence as a way of campaigning and settling political scores. As such, Heal Zimbabwe is using sports tournaments to reach out and engage youth from various political parties on the need to peacefully participate in electoral processes.

Hon. Mashange also encouraged youth and the community at large to uphold peace and desist from recruiting party members using force but instead should use non- violent approaches to lure people to their parties. The District Administrator for Rushinga also pledged to uphold peace ahead of the election and encouraged community members especially the youth to be peace ambassadors and shun violence. Soccer legend, Alois Bunjira who is also a HZT peace ambassador also graced the occasion and addressed youth, where he hammered the need for peaceful coexistence and tolerance ahead of the election. Community members present also pledged to promote peace ahead of the 2018 elections.