Victoria Falls - A 44-year-old man has died after an elephant fell on top of his car in Victoria Falls, reports said Tuesday. 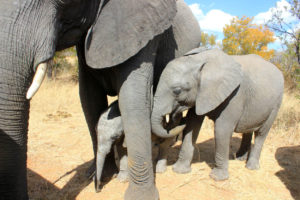 In the second fatal accident involving elephants in less than a month in Zimbabwe, John Banana and driver Benard Munapo were trapped inside the car after Munapo drove into a herd and hit one elephant along Park Way near the resort town.

The elephant fell on the car and Banana later died as a result of his injuries. The two were on their way back from a cruise on the Zambezi River, the state-run Chronicle reports.

Senior police officer Jairos Chiwona told the paper that Munapo was employed at a lodge in the town.

The incident occurred on Thursday evening. The two men were rescued by other motorists and rushed to Victoria Falls hospital, but Banana died on Friday morning.

This was the second case of a man being crushed by an elephant in a month. In May, South African hunter Theunis Botha was crushed to death by an elephant that was shot on a game farm near Hwange National Park.

Meanwhile, at least 10 elephants have been poisoned by poachers armed with cyanide on the boundary of Hwange National Park, a conservation group reported on Monday.

The Bhejane Trust says poachers used salt laced with cyanide in buckets buried along elephant trails. It said an unconfirmed number of vultures had also been killed. State media has only confirmed two elephant deaths so far.

Bhejane Trust said in a post to Facebook: “Parks (Zimbabwe’s wildlife management authority) have reacted quickly to all incidents, recovering some cyanide buckets and ivory in two cases. They are also following up on some suspects.”

“With the current economic situation in Zimbabwe we can expect a big increase in poaching this year,” it added.

There had been no reports of deaths from cyanide for several months, with the last significant cases reported in September 2016. That was when eight elephants were found dead in two separate poisoning incidents. For poachers,cyanide has the unique advantage of killing silently, meaning the criminals can often get way undetected.

The chemical is used in Zimbabwe’s mining industry and is relatively easy to obtain. The worst cyanide killing of elephants was seen in 2013 in Hwange National Park, when around 200 were poisoned (there are claims the figure was as high as 300). At least 60 elephants were reported poisoned in Hwange in 2015.