Matson Hlalo has had the impudence to blame the cowardice of Zimbabwean citizens for the failure to topple Mugabe. By doing so, he gravely insults the countless thousands who have been wrongly imprisoned, beaten up, tortured and killed, with untold numbers cast into unknown, unmarked graves. 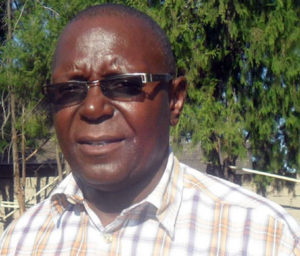 But leave that aside, if a politician accused me of cowardice, I definitely would not vote for him! And I hope all Zimbabwean citizens feel the same way. A politician with so little respect for and understanding of his own potential voters clearly lacks the political savvy to have any position of power.

To make his massive political faux pas even worse, Hlalo has got it wrong anyway! Because the fault does not lie with citizens, it sits fair and square on the shoulders of the leaders of all opposition groups. Because the reality is that the potential opposition to Mugabe is easily big enough to have got rid of him and his party years ago. There is ONLY ONE reason why he is still in power, and that is because they have been incapable of organising and presenting a big enough united front to him. It is definitely not because of the fear and cowardice of Zimbabwean citizens. So stop trying to pass the blame, Hlalo!

In fact, Mugabe must be rubbing his hands with glee at the actions of Mr Hlalo, and maybe has lit a few candles in thanks for him. Because, yet again, one of Africa’s opposition leaders acts in a way that, far from helping to remove a despotic leader, actually works to keep him in power. The worst possible damage anyone in opposition in any field of human endeavour can to do is anything that splits the opposition. The opposition can truly say of Hlalo, “With friends like that, who needs enemies?”

Frankly, this has the whiff of sour grapes over his expulsion from the MDC-T. It doesn’t matter what the real truth behind that story was because if he didn’t deserve expulsion then, he does now. He may be hurting MDC-T, but those he is really hurting are Zimbabwean citizens.

The PDP needs to recognise that. If they cannot, one needs to examine their fitness as a political party as well.

In one sense, it is unfair to blame the Zimbabwean opposition for its failure to present a united front because it merely highlights an endemic pan-African problem. Ever since the end of colonialism, Africans have never managed to work together on either a national or pan-African stage to carry out effective, concerted action to overcome oppression, or to improve the standards of living of ‘the common people’. And the reason is always the same: people cannot help putting their own differences or their own agenda above the needs of the common good.

So far, the best that oppositions have managed to achieve is to replace one repressive government with another. Arab Spring is just one example. And the new regime is often even more repressive than the one it replaced. The fight against Apartheid almost failed because of its internal conflicts, and was only saved by foreign intervention. However, since then, internal divisions within the Black opposition have meant that the huge Black South African majority has stayed in poverty in a country controlled (even if not run) by a tiny White minority.

I said earlier that the potential Zimbabwean opposition was easily big enough to depose Mugabe years ago. In addition to all Zimbabwe’s opposition political parties, this is, or should be, all the foreign and domestic NGOs operating in Zimbabwe, campaign and special interest groups, the business community (who will gain massively under a more enlightened government) and, most of all, the Christian denominations. Christians have a Biblical duty to fight oppression and poverty. Instead, they sit on the sidelines watching members of THEIR OWN CONGREGATIONS being oppressed, abused, wrongfully imprisoned, tortured and even murdered. How can anyone do that, never mind people who are supposed to have the compassion that religion demands?

In fact, with 90% of Zimbabweans as members, the Christian religion on its own is easily powerful and wealthy enough to organise, manage and lead this united front. I’m not suggesting that it gets involved in politics because that is undoubtedly wrong. BUT THIS IS NOT A POLITICAL BATTLE. It is simply a battle for the weak, the oppressed, the poor to live in a just and equal God’s world. And that falls directly into the remit of Christianity. Indeed, it is more than that, it is a clear responsibility laid by Jesus on the shoulders of all His followers. And Christian leaders are not only clearly reneging on that, they are also leading their own congregations into sin by the failure to lead them into action. Bishops, ministers, priests, pastors please take heed, and work to combine your denominations into one unified body of opposition to Mugabe and ZANU-PF.

As well as Christians, NGOs and the business community are also similarly placed to create, manage and motivate such a non-political movement as well – although, unlike Christians, they cannot do it on their own. One huge advantage Christianity, the NGOs and business leaders have in creating a single Zimbabwean citizens’ movement is that they do not have ideological differences to divide them. Unlike political parties which do have ideological differences to overcome in trying to create a united front to the regime – so far not successfully.

Having said that, there is one obvious political leader with whom the leaders of all these differing opposition groups can align themselves without the need to declare loyalty to his party, and that is Morgan Tsvangirai. And he can achieve that by simply saying he will take all politics out of it for now, and simply call another general election immediately after Mugabe is removed.

This means that all other opposition political parties can join the alliance without fear of personal loss, and it will also dispense with the present cumbersome and long-drawn out process of trying to create a coalition with all the pitfalls and compromises that entails.

Even if Tsvangirai is not the one, with all the wealth of potential leadership among the other non-political opposition groups, it really should not be beyond the wit of one of them to take responsibility for welding the leaders of all these differing groups into one, creating a grassroots movement that transcends and knits together all the differing national, ethnic, tribal, political and religious loyalties, so that everyone speaks with one voice – a “Save Zimbabwe” movement for want of a better expression. Against that, Mugabe will simply not be able to stand.

Because the reality is that everyone’s differences are actually petty when they are measured against the glorious mission of freeing all Zimbabweans from oppression.

One final point about Hlalo. He also blames weak leadership among the opposition for the failure to overturn Mugabe. Frankly, given that they are still fighting despite the torrent of verbal and physical abuse they have suffered over the years, to call these extraordinarily brave people “weak” is just belittling of true courage and determination. Wrong they may be. Weak they are most certainly not.

With such an attitude as he has shown, he clearly needs to take a course in leadership and management because he obviously believes that a confrontational approach like his is strong leadership. It isn’t. A truly strong leader seeks to minimise differences, not exacerbate them. Seeks to create harmonious loyalty, not discord. Seeks to mend fences and build bridges, not threaten them.

That is because a genuinely good leader never loses sight of the ultimate objective, in this case the greater good of all Zimbabwean citizens. So whenever they are about to act, they will ask themselves first: “Will what I am about to say or do actually help towards removing Mugabe, or not?”

Alternatively in this case: “Will what I am about to say or do help to create the unified opposition we must present to Mugabe, or not?”

In fairness, Hlalo is not alone among Africa’s leaders who pan Africa have a habit of behaving counterproductively to their country’s own cause, because there is not a great understanding of what great leadership means. And he has a very powerful personality, so it would be wonderful if he would consent to use that for the good of all Zimbabwean citizens, and not against it. But the choice is his. He could still play a great, but this time productive part.