Harare – Zimbabwean President Robert Mugabe - who said on Friday he was opposed to white farmers returning to commercial land in the country - wants President Jacob Zuma's ruling ANC to deal with white capital that still controls farms and industries in South Africa. 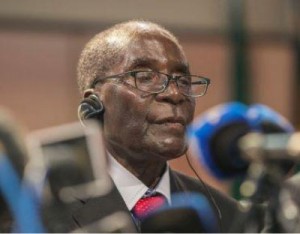 Mugabe has also been asked by his Zanu PF party to reverse the sale of Barclays Zimbabwe by the British listed lender to Malawi’s FMB.

He however did not address the issue in his address to youths drawn from his party at a rally in Marondera, just outside the capital, Harare.

He instead said his government had a problem with the ANC which was allowing whites to control the economy.

“We have a problem with our South African counterparts because the whites are still controlling industries there and they also have many farms there,” Mugabe said.

Zuma has assured South Africans that there will be no Zimbabwe-style land grabs, Business Day reported on Thursday. Zuma is pursuing radical transformation of the South African economy as he battles for his survival amid mounting pressure for him to step down over alleged state capture by the Gupta family.

Most white commercial farmers were displaced, and others attacked, when Zimbabwe started to parcel out commercial land to black farmers.

The Zimbabwean agrarian reform exercise was followed by a marked decline in agricultural productivity, leaving the country a net importer of cereals from Zambia and South Africa.

Mugabe, who is now gearing for elections next year amid bickering in his party from members angling to take over, said he was opposed to white commercial farmers returning to farms in Zimbabwe.

“The whites are coming with ideas saying we are staying in towns but at night they are are talking to our people so that they can do agriculture and then pay the black farmers. Is it right? – we are now bringing back whites to land which we took over,” Mugabe said.

He also criticised some local chiefs for selling land to the returning white farmers.

“Our chiefs, I implore you because we respect you. Among you there are many who are having close relationships with white people giving them land in return for a reward,” Mugabe added.

Mugabe’s wife, Grace, who is also leader of the Women’s League in Zanu PF, also spoke out against black farmers who are fronting for former white farmers in Zimbabwe.

“When you get a farm make sure you utilise it yourself. When others get concessions they want to sell,” she said.