Marondera – Zimbabwean First Lady Grace Mugabe torched a storm on Friday after she declared that non-governmental organisations (NGOs) were no-longer welcome in the southern African country. 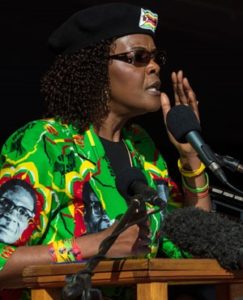 Grace said that Zimbabwe was poised for a bumper harvest this year and therefore, the country did not need humanitarian support.

“We are having a bumper harvest this year so there is no need for NGOs anymore. We don’t need them anymore because they always want to come here and disturb our politics,” said Grace.

The First Lady, who is also leader of the ruling Zanu-PF’s women’s wing, said this while addressing party supporters at a rally held in Marondera, about 80km east of the capital Harare.

She said that it was now time to “vet some of these NGOs operating in the country”.

Non-governmental organisations had been providing aid to the Zimbabwean people for a couple of years now owing to drought and poor harvests.

Prior to all previous general elections, President Robert Mugabe’s government had accused NGOs of interfering in Zimbabwe’s national politics. At one time, the government threatened to de-register all NGOs that were operating in the country, accusing them of working with the opposition Movement for Democratic Change to allegedly unseat Mugabe’s government. The organisations, however, denied the allegations.

In an interview with News24, the Crisis in Zimbabwe Coalition (CiZC), which is a consortium of several non-governmental organisations operating in Zimbabwe, criticised Grace, saying her utterances smacked of “hypocrisy”.

“The presence of the NGOs providing food has been necessitated by the government’s incompetence and failure to feed the starving communities. Most NGOs are responding directly to the mismanagement and failure by the government to provide those services,” said Memory Kadau, director of CiZC.

“It is public record that Zimbabwe requested for assistance from the international community to respond to the El Nino induced drought”.

Following the drought that affected most parts of the country last year Mugabe’s administration appealed for international support, resulting in humanitarian support organisations, including those aligned to the United Nations, chipping in with food aid.

Several NGOs were currently assisting government in the various sectors of the economy, including health and education.

The First Lady’s remarks came only a day after Sweden increased its support to the Zimbabwe Resilience Building Fund by $8 million to support vulnerable communities in 21 districts.