SIR. In reply to Moses Chamboko’s suspicions about the sale of Barclays to the Malawian FMB bank (your edition of 2/6/17), he is correct that the UK presents itself as against corruption and money laundering, and that Barclays is one of the targets of its anti-money laundering policies. 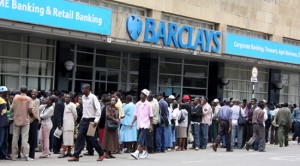 However, the story behind that could be much more devious than he suggests. Although it is true the UK tightly controls its high-profile banks (including Barclays), it also has jurisdiction over by far the biggest network of tax havens in the world, and the corrupt money that used to flow through its banks now goes through its tax havens. So the UK has lost absolutely nothing by stopping money laundering through its banks, and it continues to be complicit in the theft of billions of US dollars from Africa every year, a theft that far exceeds the total of all the aid the West sends to Africa.

What Africans are not told is that the West takes over four times as much out of Africa as it gives in official aid: US$203 billion compared to only $46 billion (China is the same, taking far more out than it gives in aid). That $203 billion is close to half the TOTAL revenue of ALL African nations. That on its own would explain why the great majority of African citizens are still in extreme poverty when it should have been eradicated years ago.

A very important part of the $203 billion – some $50 billion – the West gets each year from Africa is the illegal money that corrupt Africans and MNCs “hide” in the West. The West now holds around $500 billion in its tax havens on behalf of wealthy Africans (the total in assets will be way more than that). This is approximately a third of all Africa’s financial wealth, and more than the total annual revenue of all African nations.

So it is obviously very much in the UK’s own interests to have Barclays Zimbabwe replaced by a non-UK bank not subject to UK restrictions – it will make it much easier for Zimbabwe’s elite to send their ill-gotten money to the UK’s tax havens. I’m not saying there is any evidence to support any wrong-doing by the UK in the Barclays – FMB deal and it may be totally wrong to infer that. But Barclays is not stupid and it is financially very strong, meaning it could have waited as long as it wanted until the right deal came along. So what is actually behind it considerably under-valuing its Zimbabwe bank and selling now? It makes no commercial sense and there must, as Moses says, be other reasons.

Africans need to understand that corruption in Africa would find it very much harder to exist without the complicitness of the West, not just its governments and its multi-national companies which encourage corruption for their own gain, but also the UN, the World Bank, the IMF and the World Trade Organization, any one of which could easily stop it. Indeed, ministers of state have told me privately that the Western regulations designed to stop corruption and money laundering are simple to get around.

And the pathetic attempts by the official aid agencies and NGOs to police their aid are also simple for corrupt Africans to circumvent. In fact, the UK press has accused the UK’s government department in charge of foreign aid of actually encouraging corruption by not policing its aid properly.

I know from my own experience the complicity of the West in African corruption. The World Bank gave a US$30 million fund to an African nation to use to help new business start-ups. Despite knowing that it was run by a corrupt regime, the World Bank gave the fund to the government to administer. The government then imposed conditions that actually made it impossible to get a loan, so you can guess how much of that fund ended up in the pockets of officials, not in the hands of job-creating entrepreneurs.

Mugabe is well-known for attacking the West and its NGOs, yet his government may have collapsed years ago was it not for foreign financial aid, in the latter years heavily increased by China. Make no mistake about where his power really comes from.

If you think about it, it is in the interests of both the West and China to help keep corrupt governments in power. This explains why they keep sending foreign investment and aid even though they know very well that the real effect is just that – to keep those regimes in power – and also being well aware that the number of Africans in extreme poverty keeps rising as a result.

So the conspiracy – if, indeed, there is one – could be a lot wider than Moses Chamboko suggests.