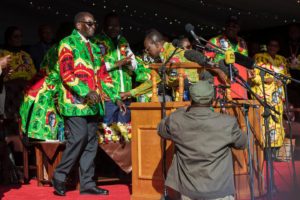 A spokesman for the main opposition party in the Southern African country—which Mugabe, the world’s oldest non-royal head of state, has ruled since its independence in 1980—said that the ruling coalition, ZANU-PF, was forcing people to show support for the president.

Mugabe has faced unprecedented discontent in recent years as Zimbabwe struggles to deal with a flagging economy. Mass opposition rallies have called for the veteran leader to step down, while social media movements protesting against the economic conditions in the country have exploded in popularity.

“The people of Zimbabwe are still being intimidated and threatened with death or some other such grievous consequences if they refuse to attend these ZANU-PF rallies that are being addressed by Mugabe countrywide,” said Obert Gutu, a spokesperson for the Movement of Democratic Change led by Morgan Tsvangirai, a former Zimbabwean prime minister and Mugabe’s main political opponent, according to the African News Agency.

Gutu said that the “atmosphere of extreme fear and intimidation” would prevent Zimbabwe from holding free and fair elections in 2018. He called upon the African Union, a continent-wide organization aimed at promoting good governance in Africa, to intervene.

Despite his old age and frail health—Mugabe regularly travels to Singapore for medical treatment—the Zimbabwean president recently embarked on a nationwide tour to drum up support. Mugabe’s party said that the president would focus on “youth issues” during the rallies.

Mugabe’s deputy, Emmerson Mnangagwa, recently denied that any residents were being forced to attend Mugabe’s events. “It is not ZANU-PF policy to force people to attend ZANU-PF rallies. If anybody who has a relative who was forced, the courts are open for them to stay, ‘I was forced to go to a ZANU-PF rally,’” said Mnangagwa.

Several of Mugabe’s election victories in Zimbabwe have been marred by allegations of fraud and voter intimidation. In the 2008 election, Mugabe lost the first round of voting to Tsvangirai, but the opposition leader did not have a large enough majority to win outright. Ahead of the second round, ZANU-PF agents allegedly embarked upon a state-sponsored campaign of intimidation and violence. Some 200 people died during the crackdown, according to The New York Times.

Mugabe will be 94 in the election year of 2018 and, should he win another term in office, would stay in power until he is 99 years old, providing he survives the whole term. The president’s wife, Grace Mugabe—widely seen along with Mnangagwa as one of the main candidates to succeed her husband—recently stoked controversy by saying that Mugabe was so popular that he could run as a corpse in the election and still win votes.