I am no fisherman, but the first followers of Jesus were and there are two ways of fishing. One is to throw out a net and haul in, if you are lucky, loads of fish. The other way is to use bait and patiently sit by the water and wait or one fish at a time. 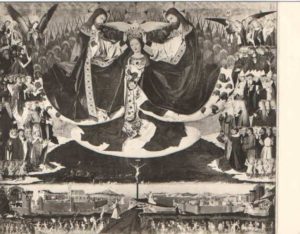 My father used to be an expert in making his own flies with tiny bits of feathers wrapped round, and concealing, a hook.  Although Jesus used the former method, in his training of the disciples – perhaps to show that “many” will sit down at the feast with Abraham, Isaac and Jacob, in fact he seems to prefer the latter.

He invites us individually, “one by one” (John 10:3). He is content to leave ninety nine to get on with it while he searches for just one. Pope Francis moves around the crowds but he will often stop and give time to one person, particularly if they are sick or disabled. Obama used to do that; he would give a grand speech on some big issue and then he would break off to talk about an individual he had heard of  and whose story touched him and was relevant to his theme. For a moment that person was the centre of focus while the 250 million other Americans watched.

But Francis or Obama cannot deal with more than one person at a time. When Jesus withdrew he sent the Spirit, his Spirit, meaning he could reach out to every individual in every place in every time. The person might have been “caught” long ago in the net, in the sense that they were “brought in”through their family, school and parish. But they still need individual attention if they are to grow into what they can be. The Spirit is the gift of the Father and of Jesus to guide this journey. Invitations to grow in the Spirit are not just given once but all the tme in every situation, to every person.