The Zaka Central community and surrounding areas gathered at Zaka High School on Saturday 10 June for the launch of the Heal Zimbabwe National Peace Campaign dubbed: "15 Million Voices For Peace". Participants pledged to actively participate in upholding the notion of peaceful coexistence as the nation braces for another plebiscite in 2018. The event saw 20 soccer teams and 8 netball teams competing for the HZT Youth Peace Cup. 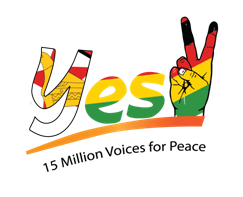 The peace campaign sets the stage for peaceful electoral campaigns and galvanise stakeholders towards a peaceful election. It aims to create awareness about peace and the need for peaceful elections in Zimbabwe. It also envision to spread the message of peace to all parts of the country and getting citizens to pledge their support for a peaceful election. In attendance were close to 800 community members drawn from nine wards in Zaka Central. The event was also graced by Member of Parliament for Zaka Central, Hon Chakona, seven Councillors, the District Administrator for Zaka, members of the police, several Traditional leaders and Masvingo Senator, Misheck Marava. During the event, participants took turns to make peace pledges. Public peace pledges are an initiative by Heal Zimbabwe that afford communities room to demand adherence to peaceful conduct by all stakeholders especially during elections. It forms a key pillar of the social contract for every community.

In order to ensure the message is easily appreciated, various artists provided edutainment. Among the artists was Seh Calaz and comedian and actor, Sabhuku Vharazipi. The event was also graced by football legend Alois Bunjira who emphasized the need for young people to consider sport as a serious profession than engage in violent conduct.

Heal Zimbabwe shall take the peace campaign to other provinces targeting community members, political leaders, youths, women, traditional leaders and aspiring candidates to pledge to uphold peace before, during and after the 2018 elections. The ultimate result is to have the entire population calling for peaceful conduct in all interactions particularly political processes within and across their political affiliations.