HARARE Magistrate Rumbidzai Mugwagwa on Wednesday 28 June 2017 ended the two-day detention of His Generation Church leader Pastor Evan Mawarire and Ocean Chihota after she set them free on $200 bail each following their arrest early this week for allegedly committing public violence and disorderly conduct. 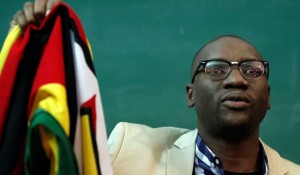 Apart from ordering Mawarire and Chihota to pay $200 bail each, Magistrate Mugwagwa also ordered the duo to surrender their passports with the Clerk of Court at Harare Magistrates Court, report once every week on Fridays at the Law and Order Section at Harare Central Police Station and to reside at their given residential addresses.

Prosecutors claimed that Mawarire, the leader of #thisflag movement and Chihota, who were represented by Harrison Nkomo and Dzimbabwe Chimbga of Zimbabwe Lawyers for Human Rights connived and hatched a plan to act violently against some University of Zimbabwe (UZ) authorities and urged some medical students to confront and force UZ Vice Chancellor Levi Nyagura to reverse the increase in fees for students.

The prosecutors charged that Mawarire, Chihota and some unnamed students staged a demonstration while holding placards with messages which reads “fees must fall, my father is a teacher”, “tongoda 1% of the $15 billion inokwana”, “my mother is a vendor” and “tohurira fees here”.