Leicester, UK. The Zimbabwe diaspora rallied in Leicester to kick off the start of UK refugee week with the #Take2Zimbabwe protest.They have held similar protests in London, Birmingham, Manchester, and back to London where they portioned the British PM to intervene on granting diaspora vote. 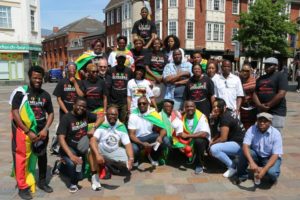 By holding the event in Leicester, the protesters are building and expanding on these previous repertoires of  demanding a second independence, this time from an indigenous leadership whose economic mismanagement has made survival all but impossible for ordinary Zimbabweans.

The event was organised by Restoration of Human Rights Zimbabwe’s Leicester branch.

“We are in UK’s city of culture joining the international community commence Refugee Week celebrations themed #OurSharedFuture.  A relevant and fitting theme for #Take2Zimbabwe. Zimbabwe is a nation producing refugees at an alarming rate for 2 decades” Mable Kayiya announced.

“Mr President, nations worldwide are being developed by exiled Zimbabweans and those fleeing your choking grip on our civil, constitutional and human rights. You have had 93 years plus of life but your regime thrives in taking lives. ‘Take 2’ pleads with you to open your eyes for a minute and see the devastating effects your grip is causing. Incline your ear to a wailing nation. What of our freedom, our voices, our lives? We sure are determined and won’t be deterred #Take2Zimbabwe” said an emotional Mable Kayiya, Campaign Director with ZHRO

As the Refugee week make it possible for a wide range of community, voluntary, and statutory organisations to host events in partnerships, the Zimbabwean group that included Zimbabwe Human Rights Organisation (ZHRO), Zimbabwe Citizens Initiative (ZCI), and Build Zimbabwe Alliance (BZA) partnered with the Red-Cross association. They shared music and dance that is traditional to the cultures of the refugees that were present.

Alfredy Mukuvare said “Walking for freedom, peace and justice to happen in Zimbabwe. This way we show the world what we are yearning for which some take for granted. 37 years of intolerable dictatorship, human degradation, and freedom which is still a pie in the sky. Uhuru will come”

Encouraging Zimbabweans in each of the UK major cities to make the #Take2Zimbabwe protest uniquely their own, ROHR’s Leicester branch chairperson Tsungirirai Kahiya said “There is so much each one of us can do to make a difference. If we don’t our country will further descend into a state of chaos. Silence never won rights. So I call upon the citizens of Zimbabwe to do something, be active and demand a better now and a better future for our children”

“We want a government that will protect the constitution and commit themselves to the rights of the people and the health of the nation. A government that is transparent and accountable” she said

Rashiwe Bayisayi pointed out that “Zimbabwe is a failed State under Zanu PF, that is why we are all refugees all over the World. Mugabe and Zanu PF please go. We want to come home to rebuild our country without fear or persecution”

A minute of silence to commemorate the  Grenfell Tower fire victims was held before speakers took to the stage.

“Our president is comfortable to spend money on endless flights whilst the country is in need. We are here because we have been forced to leave our country to seek refuge in other people’s countries” said Pythias Makonese.

Addressing the crowd, Tod Maforimbo of BZA talked about the difficulties faced by Zimbabwean refugees and asylum seekers in a new and very often difficult environment.

The political, economic, and human Rights crisis has pushed many Zimbabweans out of the once bread basket of Africa.