The book documents one of the most far-reaching, systematic and sustained efforts to promote gender in local government in Zimbabwe and in the Southern Africa Development Community (SADC) region. 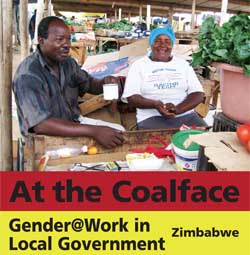 Initially piloted with 10 local authorities, the Centres of Excellence (COE) for Gender in Local Government initiative has since been cascaded to 68 Local Authorities (LAs):  74% of all LAs in Zimbabwe, servicing over 10 million people. All these councils now have Gender Focal Persons (GFP) and Gender Champions (GC), the Drivers of Change who create multiplier effects through gender action plans and gender responsive resource allocations, albeit within tight economic constraints.

The programme is a partnership between the COEs, Gender Links Zimbabwe (GLZ), the Ministry of Local Government, urban and rural councils under the Zimbabwe Local Government Association (ZiLGA), the Women in Local Government Forum (WiLGF), and the Women’s Coalition of Zimbabwe (WCoZ), the focal network of the Southern African Gender Protocol Alliance (that GL coordinates regionally) in Zimbabwe.