Zimbabwe's 93-year-old President Robert Mugabe has begun a series of rallies across the country in a bid to win the support of young people ahead of elections next year. 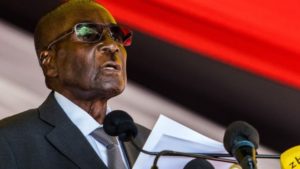 Robert Mugabe, 93, is reaching out to the youth vote

A huge crowd has gathered for the rally in a stadium at Marondera, a small town east of the capital, Harare, the state-run Herald newspaper reports.

It adds that the president is planning nine other similar rallies this year.

The country has a youthful population with more than 70% under 35, according to the last census.

There have been some recent concerns about the president’s health. He has been seen sleeping at several recent meetings but his spokesman said he was resting his eyes.