Fears of violence are growing as the 2018 elections approach. The fears are especially acute in rural areas such as Gutu West constituency, where a local NGO reports that Zanu PF intimidation has triggered panic in the entire community. 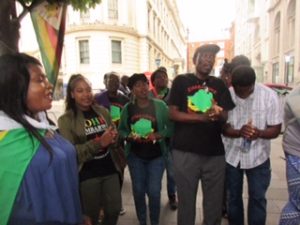 Villagers says a former chief, George Chivhande Serima, now a Zanu PF ward chairman, has warned them of severe punishment if they support opposition parties. People are being ordered to submit their names and national registration details to village heads.

MDC MP Eddie Cross says: ‘the entire rural population is living under a regime of terror built up over many years by the Zanu PF party. The level of intimidation and control is extraordinary and includes beatings, targeted abductions, rape, threats, the use of traditional leaders and threats of expulsion from their homes. It includes close supervision of voting and collective punishment for communities or villages who are known to support, in any way, the opposition.’

The Zimbabwe Human Rights Association expressed grave concern over the rise in political conflict in the country and said ‘political developments should be taken seriously by the international community to avert a slide into more violence’.

The new British Minister for Africa Rory Stewart has expressed ‘deep distaste at the horrifying record of the Mugabe regime’. He was replying to a question in Parliament about British policy in Zimbabwe asked by the Chair of the All-Party Parliamentary Group on Zimbabwe Kate Hoey: ‘Mugabe spent $53 million on private travel overseas last year. At the same time, the United Kingdom is paying proportionately more in aid to that country than to any other country in Africa. Does the Minister think that, with the elections coming next year and Mugabe refusing to implement the 2013 constitution, now is the time to put some of that money into helping voter education in those rural areas controlled by ZANU-PF, or we will not have free and fair elections?’ Mr Stewart said he agreed with her that focusing on free and fair elections was one of the most important things Britain could do for Zimbabwe.

The reports of voter intimidation justify the Vigil’s efforts, in conjunction with other human rights groups, to see civilian peacekeepers set up in rural areas to educate people in their constitutional rights and counter fear.