Why can't I get excited about the manoueverings about a coalition? 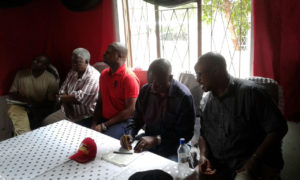 Maybe it’s because we have heard all this before, too often. It is the old story; we are great at forming organisations, apportioning offices, writing constitutions, registering, sharing the perks: anything to delay the day when we will have to make this wonderful organisation do anything useful. Has this approach ever achieved anything? Can’t we predict that, coalition or no coalition, when ZANU-PF rig the election again, there will be enough office-bearers in opposition parties or individuals with presidential ambitions to take part in the farce, accept a few seats in parliament and other perks like houses and cars – all to lend a false appearance of legitimacy to a regime that keeps proving it can and will rig any election. They get away with it because our opposition is still riddled with people who are prepared to sell their souls and their future at a lot less than the market price.
So what do we do? Sit on our hands and do nothing?
No way!
There is another example we could follow. Instead of putting all our efforts into forming an organisation before figuring out what the organisation is for, why don’t we decide what is the most important thing the opposition should be aiming for, start working for that and evolve the necessary organisation as we go along?
That is how the National Constitutional Assembly was formed in 1999. Everyone agreed we needed a new constitution and many of them had ideas on how it might be made better than the one we had. So they got to work on that. This needed very wide consultation, so they invited every sector of society to join the effort and found that they needed a structured organisation to carry the job through, so they formed the NCA.
When that had blocked ZANU’s efforts to make their own constitution, many people saw that we needed a political party to carry out the next stage of the task in parliament, while the NCA worked in the same direction outside parliament. That was a step forward. The next step proved more difficult than they anticipated, but I don’t blame them for that. They still gave us hope.
Something similar happened in 1971-2, but it carries a warning. The Pearce Commission was appointed by the British government to test our opinion on the agreement they wanted to make with Ian Smith. We all knew it was a sellout and would not help us, but all our leaders were in jail. A group of activists selected Bishop Muzorewa to lead a campaign that we all supported. They chose him to head this campaign because he was the most prominent black man who was not in jail or heavily harassed by the Smith regime. They agreed with him that they didn’t want to start another party; this was just a temporary alliance to defeat the agreement between Smith and the British government. Many people now believe that Muzorewa began to go wrong when he did decide to found his own party.
We need to keep our eye on the ball, that means remember our main aim. In 2000 that led to forming two organisations, each with its own sphere of action for the same aim. In 1972 it led to an organisation that refused to disband when its aim was achieved.
We don’t need a lot of parties, scrambling together or as rivals to collect votes. Without a complete reform of our electoral system, the words of Soviet dictator Josef Stalin will remain true: “The people who cast their votes decide nothing. The people who count the votes decide everything.”
Post published in: Featured