Dave Emberton, veteran Zimbabwean journalist and broadcaster died peacefully from heart failure with family at his side on Friday, near Durban, South Africa. He was 69. 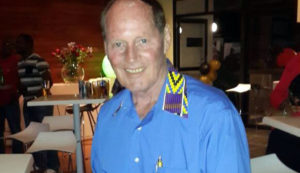 “He was a true and loyal friend and colleague who always had positive thoughts and a helping hand for others,” said Zimbabwe journalist Angus Shaw, a friend for 45 years. “Dave suffered agonising, deteriorating health in the past two years and will now be blessed at last with the peace he so rightly deserves.

He began his career as a broadcast reporter at Montrose Studios in Bulawayo and – among many other ground breaking achievements -pioneered the first live voice reports from the Hwange coal mining disaster in 1972, the worst in the country’s history, in which 426 miners died in a series of underground explosions.

He became the host of sports, music and general interest programmes. As the broadcast media advanced into television, he became a TV anchor and presenter – the role for which he is best known today as he continued on a part time basis on the ZTV nightly news right up until 2015.

After leaving full time work at the Zimbabwe state broadcaster, he joined media-related business ventures as an executive until taking up management responsibilities with the satellite TV provider DSTV, where he was a popular corporate team leader, a well-loved and compassionate ear and wise counsel to all friends and colleagues at DSTV for two decades until his retirement at year-end 2015.- agencies