Heal Zimbabwe is concerned by the assault of 12 people yesterday in Harare CBD by the police during the protest march organised by MDC T youth assembly. The police responded violently to the protest and started using water cannons, throwing teargas and beating up people randomly including those who were not part of the demonstration. 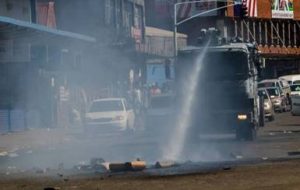 Running battles ensued between the police and the protestors for more than 3 hours. Members of the police arrested 6 activists and also forced shops to close during the melee. The six are currently detained at the Harare Central Police Station. HZT condemns law enforcement in a manner that violates section 52 of the Constitution which asserts the right to personal security and section 59 which guarantees the right to peacefully demonstrate.

The use of violence as an approach to political dissent in the country is archaic and should be condemned in the strongest terms. This conduct by the police is part of the reason why Heal Zimbabwe made an application before the Constitutional Court in 2016 seeking an order of an urgent establishment of an Independent Complaints Mechanism against members of the security forces as enshrined in section 210 of the Constitution.

The organisation also castigates the commission of arson by suspected political rivals of the MDC-T who burnt the opposition party’s Youth Assembly vehicle today around 2am. According to the MDC T, the car was parked at a Community Car park in Kuwadzana, Harare. 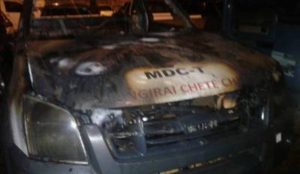 Remains of the petrol bombed car…

According to Heal Zimbabwe Human Rights Monitors, a night watchman at the car park informed them that the assailants threw a petrol bomb at the car before vanishing into the darkness. The bombing of the vehicle is being linked to yesterday’s protest march over electoral reforms.

Political tolerance is a culture which the State must invest resources and time to inculcate amongst citizens. The state has been dragging the implementation of the healing mechanism provided for in section 251 of the constitution. The National Peace and Reconciliation Commission (NPRC) is a mechanism meant amongst other responsibilities to deal with the cyclical violent episodes which have been resurgent during every election. Failure to establish the Commission results in this current  vicious cycle of violence.

Heal Zimbabwe continues to advocate for tolerance and co- existence through a National Peace Campaign #13milVoices4Peace. The organisation therefore suggests the following: