Harare - An unnamed cattle herder is the unlikely hero of Zimbabwe’s latest horror traffic accident, after he doused burning passengers with water and rescued 14 from the flames of the wreckage. 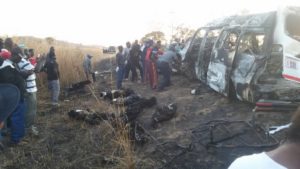 Eleven passengers were burnt beyond recognition in the head-on collision that occurred on Monday afternoon in the northern Mvurwi district, state media reported.

“Both cars caught fire upon colliding and the accident happened at a curve,” police spokesperson Charity Charamba told the state-run Herald. The accident involved a Nissan Caravan carrying 21 passengers, and a Honda CRV carrying four people.

She said the 14 survivors were rescued from the minibus by a local cattle herder.

‘Thanks for being brave’

“In some instances, he had to pour water on the bodies of those passengers who were burning,” she said. “We want to thank him for being brave.”

Zimbabwe’s roads are notoriously dangerous. Last month 43 passengers were killed after their overcrowded Zambia-bound bus veered off a road in northern Zimbabwe and smashed into a tree.

Charamba said the two vehicles involved in Monday’s crash were speeding, and that the driver of the minibus was guilty of “massive overloading”.

“We appeal to drivers to exercise extreme caution especially when carrying passengers to avoid these kinds of accidents,” she said.

Police said last week that more than 38 000 road accidents occurred in 2016, down from around 41 400 in 2015. They claim their unpopular policing of the roads through numerous checkpoints and roadblocks is helping to curb accidents.