I have said this before – but we need to understand this essential fact of history – we are all migrants of one sort or another. However, we must recognize that present modern migration trends represent an unprecedented crisis for both the developing and the developed world. When my Grandfather migrated from Ireland to South Africa in 1877, he was a small part of a global effort to spread the gospel to the newly colonized Third World. 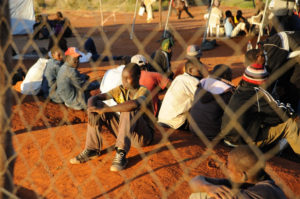 We need to recognize two things about this form of migration – first, it took highly educated, principled and dedicated men and women from the developed world at the time, to countries just emerging from a history and culture of shifting agriculture, nomadic life and intertribal warfare. They made their homes in lands that did not even have the wheel. Secondly, it was on a very small and selective scale.

Today over 130 million people migrate from their own countries to greener pastures every year – and that is the official figure. The migrants are extremely diverse – poor, half-starved refugees from camps in Africa and the Near East, students who go to study and never come back, political and economic refugees seeking escape from tyrant governments and economic collapse associated with food shortages and few real work opportunities.

Two features stand out for me – the first is qualitative and the second is quantity. In the first instance, modern migration constantly and deliberately drains the best brains and innovators as well as business persons, out of the Fourth and the Third and even the Second World countries that desperately need their services. They transfer their skills and capacities to the developed countries where they have the effect of increasing established global disparities in income and wealth. Their absence from their mother countries means that political and economic changes that are so desperately needed are made so much harder because of the weakness of Civil Society and the Middle and intellectual classes.

The second is the sheer scale of these human movements – the Zanu led Government in Zimbabwe murdered 20 000 people in the south and west of the country from 1983 to 1987, but 1 200 000 people flee the carnage to South Africa and a dozen foreign countries where they sought and often obtained refuge. The collapse of our economy from 1997 to 2008 led to half a million people fleeing the country every year – one third of our total population now lives outside the country. The only good thing that comes from these massive social movements is the rising tide of remittances – up to half the GDP of the countries in the horn of Africa is now made up of remittances from abroad and half the population lives outside their homelands. Without remittances to Zimbabwe, widespread hunger and deprivation would be the norm. Support for basic education from the Diaspora now exceeds our own budget allocations by more than half.

The problem with this second aspect is that it creates serious problems for host governments and societies – poverty levels rise and social expenditure rises to unsupportable levels. The remittances back to their families is poor recompense. We have large areas of the country up against the South African border where there are few people, empty schools and many families without a man or male children to carry out livelihood tasks in the villages. The collateral damage done to families whose bread winners have had to migrate to make money to send back to their families is immeasurable – 73 per cent of all children in South Africa are growing up in single parent families. The state of families in places like Somalia and the Sudan must be even more disastrous.

My wife and I watched an American film the other night called “The Good Lie” which was based on a true story of six children who had their entire families wiped out in a rebel raid on their Village in southern Sudan – part of a wider Christian/Muslim conflict. They walked nearly 600 kilometers and four survived to get into a refugee camp in Kenya. There they remained for 13 years – getting a rudimentary education and sparse but adequate food rations provided by Western Donors and the UN Agencies. Then one day they found their names on a list for migration by air to the United States.

They all became American Citizens – but one who had trained as a Medical Assistant in the States heard of a brother whom they thought was dead had arrived in the camp from which he had come to the USA. He flew back to find him and when he could not get the required permits to give his brother entry to the States, he gave him his own passport and told him to go back and leave him in Kenya – this was the “Good Lie”. A very moving story but it does nothing to glamorize the real situation – those four kids left millions behind, they obtained a life style that could never be imagined in their home countries and villages.

I once had to give a talk to students at a Danish University and there I argued for open borders and the free movement of people. There was no doubting the response – they were horrified and totally rejected any such notions. It is one thing for the EU to have such policies for the people who live within its boundaries but they have similar standard of living and cultures. Those Danish students may have agitated against apartheid but they knew full well what mass migration from the poor countries to the rich lands of Europe would mean.

Angela Merkel tried to get Africa onto the Agenda of the G20 – I am sure it was discussed but in the hundreds of hours of analysis and comment I doubt if I heard the word “Africa” mentioned more than half a dozen times. But what she wanted was to get the wealthy countries to agree to was a new program of support for job creation in Africa. She wanted the Summit to adopt a target of 20 million new jobs a year in Africa south of the Sahel. She further wanted to cut back aid to governments and State institutions and NGO’s. She wanted more private sector investment and technology transfer.

As fifty decades of donor aid have shown – it does nothing to solve the underlying problems – it only entrenches State corruption, monopoly political power and does little to lift the millions of absolute poor out of desperate poverty. She is right – going on doing things the way we have for decades, is not going to solve the problems that are creating this flood tide of migration that now threatens world stability and growth.

The key to this process of change and development lies in two areas – rapid economic growth, driven by investment and technology transfers in the less developed world and internal, political changes driven by a growing middle class and intellectual elite. The two are interwoven and we must find ways to drive the growth of Africa, using international resources, perhaps underwritten by major developed counties and then make space for the political changes and freedoms that growth will generate. That is exactly what is happening in Asia and South America and we should learn from their example.