Four years after the vaunted new constitution was approved in a national referendum, Zanu PF has forced through an amendment restoring the President’s power over the choice of the Chief Justice and other top judges. 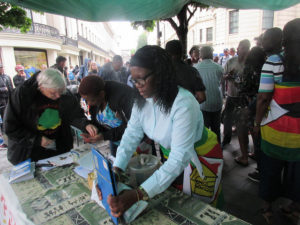 Considering that much of the 2013 constitution has still to be implemented, including the right of a vote for the diaspora and the right to demonstrate – it is ominous that the first amendment further undermines the rule of law.

The amendment was moved in the House of Assembly by Vice President Mnangagwa, who is favoured by the West (and China) to take over from Mugabe as the ‘sane’ element in Zanu PF.

The MDC in Parliament found Mnangagwa anything but reasonable. It pointed out that the parliamentary move was clearly violating the express views of the nation, the independence of the judiciary and the principle of separation of powers.

Eddie Cross, MDC MP, who fought against the constitutional amendment said: ‘I despair of sanity in this mental Institution where the inmates seem to be in charge’.

The Vigil was opposed to the waste-of-time constitutional process from the beginning. It lasted years, cost millions and diverted the energies of the MDC during the so-called government of national unity from the need for electoral reforms. The shambles of the 2013 elections was the result.

Now, once again, the MDC is faced with the dilemma of taking part in a charade or declaring to the world: there is no democracy in a lunatic asylum.