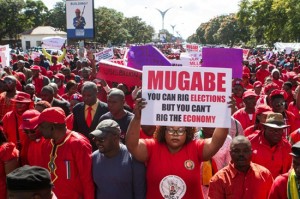 You do know, don’t you, that in your anxiety to remove Mugabe and ZANU-PF, you are overlooking by far the biggest weapon you have? That is because the African history of ousting repressive governments is appalling because it has almost always simply meant one corrupt, self-interested, repressive government replacing another. And you are doing nothing to prevent that from happening in Zimbabwe. But there is a way to do that.

You are also not going about ousting Mugabe and ZANU-PF in the best way. At the moment, Zimbabwe’s opposition is made up of disparate groups. Apart from the opposition political parties, these include all Zimbabwean activists, campaign and special interest organisations (such as for women and youth), all foreign and domestic NGOs working in Zimbabwe, trade unions, the Christian Churches and the business community.

Collectively, this is a huge group and easily able to ‘swamp’ Mugabe and ZANU-PF. Unfortunately, instead of combining together into a unified force perhaps under a single banner like ‘Free Zimbabwe’, you are all acting in your little bubbles and following your own agendas.

That is not the best way to defeat a tyrant. Defeating a tyrant generally involves a mass movement of citizens all speaking with one voice.

Finding that one voice – a message that everyone can combine behind – is hard. But not in your case because it has been there all the time, at least since 2015. That is the AU’s Agenda 2063 and its accompanying First Ten-Year Implementation Plan 2014-2023. This is entirely non-political and non-partisan, and it gives all campaigners and opposition politicians who genuinely want a free and prosperous citizenry everything they are asking for.

Everyone – campaigners, politicians or otherwise – who is genuinely working for a better life for Africans needs to become expert on Agenda 2063 and the First Ten-Year Implementation Plan 2014-2023. Unless you become expert, you cannot carry out your campaign effectively. Let’s look at some of the highlights of Agenda 2062:

No longer will Africans be governed by corrupt, repressive, self-seeking governments that keep their citizens in poverty and continue to exploit them as badly as colonial governments did.

Agenda 2063 spends more time on this than on any other single topic. That is because it understands that African citizens cannot look forward to a free and prosperous future unless they themselves take responsibility, drive the nation and are at the heart of governance.

But how can this possibly be achieved? Agenda 2063 explains: “All the citizens of Africa will be actively involved in decision making in all aspects of development, including social, economic, political and environmental.” Under these circumstances, corrupt, repressive, self-seeking governments will not be able to survive.

This will be achieved through “shared prosperity” and “inclusive growth”, which in simple terms means that as the nation becomes wealthier, so will its citizens. And that in turn will be achieved by ensuring that “Economies are structurally transformed to create shared growth”. In other words, systems will be put in place to ensure that increases in personal wealth will run in tandem with increases in national wealth.

To start with, incomes will increase by 30% by 2023, and “The proportion of the labour force not receiving liveable wages would have declined by at least 25%”. If you think that is impossible, it most certainly is not if your government does what it should do. Indeed, it could have done this and very much more right from the end of colonialism.

As part of your improving standards of living, also by 2023 “safe drinking water and sanitation will be available to nine out of ten persons and electricity access and internet connectivity increased by at least 50%”. “Incidences of hunger and malnutrition would have been reduced by at least 80%”. There are targets to deal with a huge range of health issues by 2023. And both the housing deficit and slums will be reduced by 10% by 2023.

With regard to education, by 2023, every child will be going to secondary school. And of those who do not go on to college or university, 70% will get “the opportunity for technical, vocation and training programmes”.

Agenda 2063 gives women’s organisations everything they have been asking for. It devotes a huge amount of space to ensuring that women will have equal rights and parity across all walks and in all spheres of life, including a full say in the governance and development of both Zimbabwe and Africa. There is a long list of targets to be met by 2023.

Again, Agenda 2063 gives youth organisations everything they have wanted with, again, a long list of targets to be met by 2023. Of particular note is support for young entrepreneurs because in many ways, these are the future of both Zimbabwe and Africa.

The incentive for Black African businesspeople to support and promote Agenda 2063 is huge. Agenda 2063 wants a massive increase in Black African financed, owned and led businesses, because it knows that is only way African citizens will become “amongst the best performers in global quality of life measures”.

Agenda 2063 has many targets for helping its Black private sector grow dramatically by 2023. This will create mind-boggling opportunities for Black entrepreneurs and businesspeople as they ride the wave of a fast-growing public and private sector. But, of course, that will only happen if they support and promote Agenda 2063 as much as they can.

Agenda 2063 is very clear in recognising that Africa’s future does not depend on foreign aid (it wants that cut by 75% by 2023), or on foreign investment or development. Indeed, if Africans are to become “amongst the best performers in global quality of life measures”, then Africa will need to become fully self-reliant, with an economy that is 75%-90% Black financed.

This is only a very small part of Agenda 2063 and its accompanying First Ten-Year Implementation Plan 2014-2023. The whole provides a complete blueprint for creating the Africa that all decent-minded Africans want. In fact, its full title is Agenda 2063 The Africa We Want.

But none of this will happen unless you, the citizens of Zimbabwe, your activists and civil society organisations, do what Agenda 2063 asks you to do which is to require “all political parties / private candidates to use Agenda 2063 as a basis for preparing their political manifestos”. And don’t vote for them if they don’t.

Agenda 2063 makes this plea because, although every African government (including Zimbabwe) has agreed to “Adopt/ integrate Agenda 2063 and the associated Ten Year Implementation Plans as the basis for developing their national visions and plans” – and thus make it official policy for all of Africa – not one has done so.

And the reason is obvious: the last thing they want is for their citizen population to “be actively involved in decision making in all aspects of development, including social, economic, political and environmental.” If that were to happen, their corrupt practices would go and they could no longer exploit their nations and their citizens for their own gain.

Nor do they want to see a prosperous and well-educated citizenry because it is well-known that repressive and self-seeking regimes cannot survive in the face of that. Poverty is an essential part of keeping a populace in its place. So although Agenda 2063 looks very well on paper, is not what any African government is interested in seeing actually implemented.

Because Agenda 2063 will fail if it is left to Africa’s current governments, the AU knows Agenda 2063 must have the involvement of citizens if it is to succeed. So it positively cries out for them to become involved, with such statements as:

“The determination, participation, self-reliance and solidarity of Africa’s peoples……are preconditions for success”

It’s worth pointing out that, when you look at the history of what are now the developed nations, in no case was it the government that took its citizens out of oppression, and out of poverty and into affluence. It almost always took a mass movement of a nation’s own citizens to do that. There were a few exceptions to this rule, but only in circumstances that do not apply in Africa, or in Zimbabwe. This is a vitally important lesson that the citizens of most African nations need to learn (as well as demonstrating what an extraordinary leader Seretse Khama was).

So if Agenda 2063 is not adopted by Zimbabwe’s current opposition “as the basis for preparing its political manifesto”, Zimbabwean citizens only have themselves to blame if they stay where they are, oppressed and in extreme poverty. But even more to blame will be the campaigners, civil society organisations and opposition political parties whose primary job should have been to educate the general public in what Agenda 2063 requires of them if it is to succeed.

Remember this: “If we don’t stand up for ourselves, other people will stand on us”. And that is exactly what has happened, not just in Zimbabwe, but pan Africa, ever since the end of colonialism.