Zimbabwe President Robert Mugabe's endless visits to Singapore are most likely more than medical, but a cleverly disguised way of stashing millions of stolen dollars. 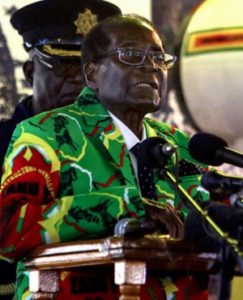 Mugabe and his misguided, kleptomaniac, and highly immoral wife Grace have been accused of having a hand in the disappearance of the US$15 billion from diamond sales, which just vanished into thin air.

How can such an enormous amount just vanished without  a trace?

That is certainly not possible.

And who is best placed to move such a huge amount of money across borders without a hassle?

There is absolutely no doubt in my mind that Mugabe’s endless trips to Singapore are more than just medical – the old man is stealing huge sums of money in cash from Zimbabwe.

That is the main reason the country does not have any cash left, as it has all been taken to Singapore by Mugabe.

Whilst the  people of Zimbabwe are facing untold suffering due to cash shortages – most sleeping on the dangerous streets, waiting for banks to open – Mugabe is busy stealing the little cash the country has, and shipping it off to Singapore.

That is why, as a member of the UK vigil group, I demonstrated against the visit to London by finance minister Patrick Chinamasa on the 4th and 5th July 2016, as I strongly believe that the government of Zimbabwe should not be given any money, which will only be plundered by Mugabe and his family, whilst Zimbabweans continue to wallow in abject poverty.

Mugabe is a heartless bloodsucking vile man, and should not be allowed to continue feeding on the lives of poor Zimbabweans.

He should be stopped in his tracks before he completely plunders the country dry.

The government of Singapore should be seen to be living up to its international responsibilities and search Mugabe and his plane whenever it lands in the country.

Similarly, Singapore should investigate all of Mugabe’s investments, and economic activities in the country, so as to ascertain where the money came from, and engage organisations such as InterPol.

All of Mugabe’s funds and investments should be frozen until thorough investigations are conducted.

The world should not tolerate leaders who molest their own people, whilst they enrich themselves.

In fact, if any illegal action is uncovered, the Singaporean government should arrest Mugabe and his wife as soon as they land in the country.

There is no better place for that kleptomaniac and murderous family to be than a Singaporean jail.

Zimbabweans have had enough of this family, who think that they own the country, and that every resource is their own personal fortune.

Furthermore, Zimbabwean civil society should not be duped by these so-called ‘medical’ visits to Singapore.

Mugabe knows fully well how Zimbabweans enjoy it when he is reported to be sick – or even dead – so he is now using that as a distraction whilst he pilfers billions of dollars from the country.

Therefore, Zimbabwe civil society should pressure, not only the Singaporean  government, but also all other Far Eastern countries to investigate any financial activities by the Mugabes.

There is every chance that those countries have also been used to stash loot stolen from Zimbabwe, or at least as transit stations.

Zimbabweans want every cent of their stolen money accounted for.

They have had enough of Mugabe and his wife, and demand that they be thrown in jail for every cent that they have stolen from Zimbabwe.

Sandra Kudenga is a member of the UK vigil.