The Zimbabwe Land Commission, established as a result of the new national Constitution, has a major task ahead of it. It is vital that an independent Commission looks at the range of land issues in the round. The complexities presented by the post land reform situation are enormous, and a piece-meal approach will not do. 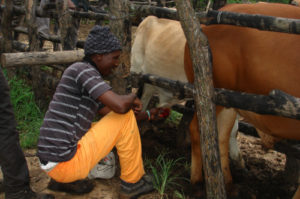 Instead, as mentioned in several blogs in this series already, a comprehensive, district by district approach is required, one that is attuned to local circumstances and so flexible, and one that is cost-effective and fiscally sustainable. No matter what donor projects are on offer, they must be resisted unless the state – and private financing combined – can make the system work into the future.

What might this look like? Previous blogs in this special series have highlighted some of the elements. These include the challenge of land auditing; the major issue of compensation for ‘improvements’; the importance of securing women’s rights to land; the process of land dispute negotiation and settlement; the mechanisms to ensure land tenure security; and the question of financing agriculture and land investment. All of these are interconnected. None can be dealt with alone.

But recreating a land administration system (and associated capacities for land information management, survey and audit) in the context of a dilapidated government system, with few resources, is an enormous challenge. Combine this with the highly politicised nature of land in Zimbabwe – from all angles – and the role of political capture, patronage and corruption in land dealings, both rural and urban, and the challenge becomes even larger. As discussed many times in this blog, the rebuilding of an effective, accountable and functioning bureaucratic state avoiding ‘normalising’ corrupt and authoritarian rule, reclaiming it from its politicisation and even in some quarters, militarisation, is an essential task, as many others have pointed out too.

In the land sector, this is going to be tough. And with elections coming, not something for the next year most likely. But it is essential if a productive, stable post land reform future is ever to be achieved. There are plenty of people willing and keen to make this happen – across government departments there are many committed, capable and highly effective civil servants, and in groups like the Land Commission there are similarly highly qualified people. It is possible, and it is also urgent.

What would be the key elements of a district level pilot of a new land administration system for Zimbabwe? The diagram below shows how different elements interact. 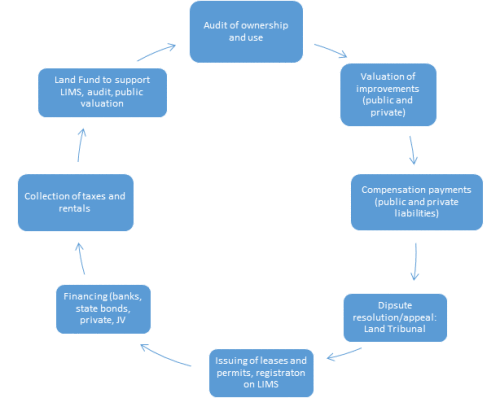 A starting point will be a land audit to get basic information on what is going on where and who is using land for what. This needn’t be that elaborate, and should not aim to map and measure everything, but is the starting point for a process of paying compensation for improvements. As discussed in a previous blog in this series, this has blocked change for years, and while systems are in place, there is lack of capacity to implement. A relatively rapid approach is required, using existing databases, in order to clear the way for allocation of leases and permits.

For defining compensation and who is liable, as discussed in an earlier blog, the definition of private and public assets and so liabilities is essential, as this paves the way for deciding who should pay what. For public assets, and for all the A1 smallholder areas, a major public scheme is needed, paid for through debt restructuring and grant finance. For private assets, systems of payment based on an effective land taxation system will be required, linked to a Land Fund that can manage the overall financing of the land administration system. If governed by clear rules and with effective oversight (which will require some work and investment) from the state, private actors may be important in audit, valuation and other assessment techniques.

However because of lack of trust and a long elapsed time since land reform, as clear political agreement on process is needed for the audit-valuation-compensation phase to work well. It does need to be done quickly, and starting at a district level may make it more feasible, and lessons could be learned about how to do it well. A statutory – and trusted – dispute resolution system will be required. This might, as discussed in an earlier blog, require a temporary standing Land Tribunal to process cases quickly, and deal with the backlog and avoiding flooding the courts. What Zimbabwe can ill-afford is on-going legal battles in courts around the world. The Constitution has provided a framework for addressing this, agreed by all political parties, and it is this that must guide some resolution. Sticking out for something else, which will never happen, only puts off a sensible resolution, allowing everyone to move forward.

Once some level of compensation is paid, in line with Constitutional requirements, leases and permits need to be issued – and quickly. A long wait for cadastral survey would halt things too much, so more ground-level, participatory techniques will be required, and an online, efficient system for recording information and issuing legal documents required. The idea of issuing private freehold title as proposed by some is sheer madness and would cause total chaos. In my view, the state must continue to have a role in regulating land use, so as to avoid land consolidation and multiple ownership infringement and uphold, for example, women’s rights. Leases and permits therefore make much sense, as long as they delivery security of tenure. As discussed in a previous blog, this is to do with much more than the legal standing of a piece of paper. What’s important is that the wording of leases and permits should include safeguards against rapid politically motivated overturning of property and use rights. There is a delicate balance, and requires clever drafting, but this is certainly possible, and strides towards this have been made, given earlier critique.

With leases and permits issued, financing for production is essential. There is no point in having an elaborate administrative system if investment and production doesn’t result. This has been a major bottleneck in post land reform agricultural growth, especially in A2 areas, as discussed in an earlier blog. Only part of this is due to the failure to address compensation and issues leases, as wider factors are at play, as discussed in an earlier blog. Getting finance to agriculture may require state backing, including loan guarantees, and encouragement to finance institutions, as in the Moveable Assets Bill, facilitating lending by banks. It may also involve getting other players from the private sector involved, under an effective regulatory framework, including contracting companies and joint ventures.

Once finance for agricultural production and investment is secured and flowing, then insisting on full and regular payment of land taxes and rentals is essential. This will require a much more stringent approach than exists now, along with enforcement capacities of the state. Regulated turnover of land will also help address issues of underutilisation, especially in the A2 areas, as only those producing and investment will be able to pay up. Potentially significant flows of taxation revenue then can replenish the Land Fund to support compensation payments (for public elements, combined with grant finance from the state and donors), as well as ensure the fiscal sustainability of the overall Land Administration system – across the Ministry of Lands, the Surveyor General and other government departments – where staff need to be paid, equipment needs to be bought and the whole system serviced over time, in perpetuity.

Getting all of this to work together is of course a tall order, given the current state of affairs. Trying only one bit at a time – say issuing leases or insisting on taxation – will not work. It’s the system as a whole that’s important. As I’ve argued before, trying out such a system in a select number of places is the way forward. This might be, for example, 6 districts to start with in different agroecological zones and so testing out processes in different contexts. Places could be chosen judiciously where there is some capacity and a political willingness to try things out, innovate and create an effective system from the district up, and where big, complex disputes are festering that will take ages to deal with. We need to have a ‘proof of concept’, one that is efficient, manageable and fiscally sustainable, and can work fast to resolve the on-going mess that is Zimbabwe’s land administration system.

This post was prepared by Ian Scoones and appeared on Zimbabweland.  It is part of an occasional Zimbabweland blog series on priorities for the new Zimbabwe Land Commission.