WASHINGTON — A Zimbabwean Barnabas Mwanaka is facing charges of allegedly killing a policeman in Harare a few weeks ago. 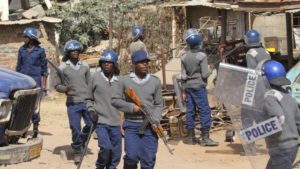 Armed Zimbabwean police battle rioters in Harare, Monday, July, 4, 2016.Police in Zimbabwes capital fired tear gas and water cannons in an attempt to quell rioting by taxi and mini bus drivers protesting what they describe as police harrasment.The violence came amid a surge in protests in recent weeks because of economic hardships and alleged mismanagement by the government of President Robert Mugabe.(AP Photo/Tsvangirayi Mukwazhi)

Mwanaka’s attorney Tonderai Bhatasara told VOA Studio 7 that his client, who is a member of the youth wing of the opposition Movement for Democratic Change led by Morgan Tsvangirai, is expected to brought before the courts on Wednesday.He will face additional charges of allegedly beating up a policeman Talkmore Phiri and obstructing the course of justice.

Mwanaka is alleged to have committed these offences at a time some vendors staged public protests, near the MDC-T’s Harvest House headquarters, claiming that they were being abused by the police.

On the murder charge, he was remanded in custody and asked to appear again in court on July 24.

According to the Zimbabwe Lawyers for Human Rights, Mwanaka (35) who is a Harare resident, was arrested on Saturday July 8th by ZRP officers and charged on Monday with murder as defined in Section 47 of the Criminal Law (Codification and Reform) Act (Chapter 09:23).

“ZRP officers charged that Mwanaka together with some of his accomplices, who are reportedly still at large and mostly vendors trading around Harvest House, the MDC-T party’s headquarters, mobilised themselves on Thursday 29 June 2017 and connived to attack some police officers from the ZRP’s Police Reaction Group, who were on duty escorting some officers from Harare Central Police Station’s Operations Unit.

“The police officers from Harare Central Police Station’s Operations Unit were reportedly going to attend a ‘scene’ of malicious damage to property at the Deeds Office in central Harare.”

Mwanaka, the ZRP officers claimed, hit the now deceased Phiri with stones and “booted” feet, and the police officer had to be rescued by his workmates who rushed him to Morris Depot, where he was pronounced dead on arrival.

Mwanaka is denying the offence.