Ninety four critically endangered White Backed vultures have been reported dead after feeding on a poisoned elephant carcass recently in Zimbabwe. The incident occurred in Gonarezhou, a small locality near the town of Chiqualaquala, an area which has become a hub for illegal wildlife trade along the country’s border with Mozambique.

It is unclear how the elephants were poisoned, but a wildlife poisoning and mortality report from Frankfurt Zoological Society experts indicated that the elephant was killed by a watermelon laced with what is suspected to be Temik, a carbamate pesticide. Experts are analyzing samples in a laboratory to determine the poison.

“The tusks of the elephant were removed, so not sure whether the cause is accidental, secondary poisoning or deliberate lacing of carcass to cause vulture deaths,” according to the report.

Conservationists working at the Gonarezhou National Park have said the motive for poisoning is likely to be ivory as only the elephant’s tusks were missing at the time the carcass was discovered, whereas all body parts of the vultures were intact. However, vultures are also deliberately poisoned by elephant poachers to avoid detection by wildlife authorities because of vulture circling behaviour and could perhaps be an additional motivation to poison vultures.

BirdLife Zimbabwe has expressed concern over the incident and has immediately developed plans to step up efforts to protect the birds which are already declining in Africa. Anti-poisoning work by BirdLife Zimbabwe has already been ongoing in Hwange National Park, to reduce this illegal activity that has claimed the lives of many vultures. 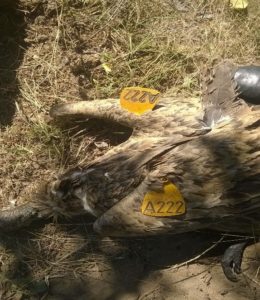 “I was shocked and sad. This is a huge set-back for vulture conservation efforts in Zimbabwe and in the region. The incident took place within the borders of Zimbabwe, but vultures are wide ranging birds and could have come from neighbouring countries. By poisoning wildlife we are also poisoning ourselves,” said Fadzai Matsvimbo, Manager of the Preventing Extinctions Programme at BirdLife Zimbabwe.

Ms Matsvimbo described the decline of vultures in Africa as “our legacy and heritage of future generations being destroyed,” noting that four species are already listed as critically endangered, and such losses only edge them closer to extinction.

“We certainly cannot afford to lose these majestic birds from Africa’s landscape,” she stressed.

Illegal poisoning of wildlife has caused a chain reaction with disastrous effects on vultures who are the hardest hit by indiscriminate poisoning using poison baits where farmers and herders are typically targeting predators such as lions and hyenas, while poachers target other animals like elephants for ivory. It is known that one poisoned elephant carcass can cause the death of up to 500 critically endangered vultures.
BirdLife Zimbabwe’s approach has been to increase awareness raising efforts on the plight of vultures to involve locals and members of the public in the campaign to conserve the birds. The BirdLife International Partner is also reaching out to law enforcement agencies, legislators and prosecutors to ensure that laws are adequate and enforced.

“Perpetrators of such crimes when caught should face deterring sentences. All vultures are Specially Protected Species under the Parks and Wildlife Act. They should benefit fully from this status by having the law protect them to the fullest,” said Fadzai.

Most vultures are teetering on the brink of extinction across Africa. Considering the vital role they play in preventing spread of life-threatening diseases, the BirdLife International Partnership in Africa is working closely with communities, governments and other experts to save vultures in the continent.

BirdLife’s approach has been to develop an integrated anti-poisoning campaign in several African countries working alongside wildlife authorities to rapidly respond to poisoning incidents and minimize the casualties while also establishing vulture safe zones, and ensuring wide stakeholder involvement of locals, scientists, government and other stakeholders in the protection of the birds are important steps to reverse the dangerous trend that has engulfed their survival.

These collaborative efforts have given communities the platform and information to report poisoning incidents and governments have developed legal frameworks to address poisoning and prosecute perpetrators.