Manicaland Provincial Affairs minister Mandi Chimene appears to have been smoking weed again. Only a few weeks after raving about mbanja to Mugabe at his Mutare rally (see: 17th June diary - http://zimvigil.co.uk/the-vigil-diary/868-who-needs-wheels-zimbabwe-vigil-diary-17th-june-2017), she has come up with a proposal to lie to attract tourists. This may be acceptable to an advertising agency but should it be government policy? 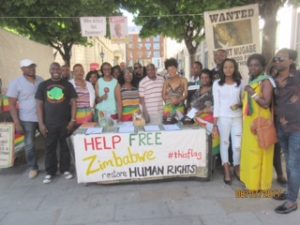 Chimene urged those involved in tourism in Manicaland to claim that an Indian tourist who mysteriously disappeared three years ago while climbing the sacred Inyangani mountain would return one day. ‘Some of them will wait for him to meet them’ she said, adding ‘this world is so cruel. We need strategies if we are going to survive in this industry’.

Mandi’s attitude is in keeping with Zanu PF’s deceitful short-termism: when in doubt lie. Reality is an illusion. One minute Vice President Mnangagwa assures prospective South African investors that land invasions are over then, incited by Mugabe, the remnants of a farm developed by a white family over the last 80 years are seized – and by none other than the presiding bishop of the Pentecostal Assemblies of Zimbabwe.

As the Vigil has long pointed out, the delusional world of Zanu PF – with their alternative reality – has gained a foothold in the UK where a professor at London University’s School of Oriental and African Studies Stephen Chan has now published a book claiming that, despite opposition complaints of election rigging, Mugabe would have won the 2013 elections anyway – and furthermore the elections had taken place under relatively ‘credible’ conditions.

And, anyway the Vigil wonders how you can ‘crunch’ the voters intimidated into voting for Mugabe or the opposition voters moved off the voters’ roll by the Israeli Nikuv rigging company employed by the Mugabe regime when even the Zimbabwe Electoral Commission says it doesn’t have a copy of the 2013 voters’ roll? (see: https://www.newsday.co.zw/2017/06/26/zec-refuses-release-2013-voters-roll/).

The Vigil is aware that a cabal sympathetic to Zanu PF at London’s Chatham House think tank and Oxford University shares Chan’s delusions but to us a more convincing analysis of Mugabe’s repeated victories was given in a recent article by the MDC Bulawayo MP Eddie Cross who outlines the strategies he says were used to achieve Mugabe’s re-elections (see: http://www.thezimbabwean.co/2017/06/will-election-2018-solve-problems/).