We have been tracking a clandestine voter registration scam by Zanu PF using Registrar-General Tobaiwa Mudede’s office outside and ahead of the legal voter registration process by ZEC, now legally mandated to carry out such exercises. 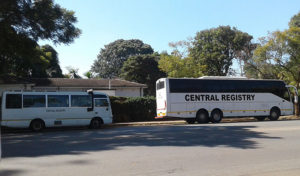 Only yesterday morning, two buses from the Registrar-General’s Office with registration numbers ABT-2419 and AEF-7111 left the RG’s Makombe Offices along Harare’s Leopold Takawira Street  at exactly 1113hrs headed for Noah Taguta’s church shrine in Marange, Mutare West, where insiders said an illicit voter registration exercise for Zanu PF supporters in Manicaland  was scheduled to kick off today. 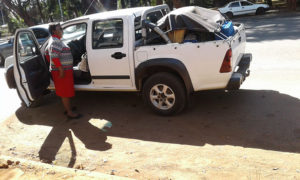 Under the arrangement, all Zanu PF districts in Manicaland would surreptitiously bus their members to Taguta’s shrine for the voter registration exercise, disguised as a birth registration process. The team is headed by a Ms Dorkins, a senior registry official believed to be related to President Robert Mugabe through her mother. She left the Makombe offices ahead of the two buses aboard an Isuzu truck registration number ABW-1445.  Ms Dorkins will reportedly lead the team of registry officials in Marange for the next 14 days. Each of the members in the team would reportedly receive allowances of US$50 a day.

While debate rages over the contentious BVR exercise and ZEC’s decision to prejudice the MDC by earmarking fewer registration centres in the urban areas, perceived to be opposition strongholds, it has emerged that Zanu PF has already clandestinely begun its own parallel voter registration exercise.

Officials close to the development say a similar exercise was recently held in Tsholotsho.

Our investigating team was briefed of how in the last election in 2013, the 144 District Registrars from all the country’s 144 districts were accommodated in hotels in a well-planned scam to clandestinely register voters, including issuing uncollected national ID cards to Mozambicans, who were paid US$20 each and were allowed to use voter registration slips on voting day.

As we brace for the watershed elections in 2018, Zanu PF is at it again. The leopard has remained faithful to its spots. On our part, we are urging all Zimbabweans to turn out in large numbers when the voter registration procession kicks off.

Rigging has its limits and the fact that we are being constantly briefed means that even those Zimbabweans being abused by the system are now  tired of serving this inept, corrupt  and incompetent regime.

A new Zimbabwe is imminent.