WASHINGTON — ZEC chairperson, Rita Makarau, told VOA Studio 7 that part of the money has been handed over to Laxton Group of China, which recently won a tender to supply voter registration kits. 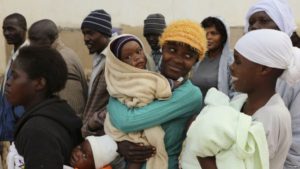 FILE – Zimbabwean women react as they wait to casts their votes at a polling station in Domboshava, about 45 km (28 miles) north of Harare, July 31, 2013.

Makarau noted that they have so far disbursed $3,5 million to Laxton and the remainder is expected to be released when the kits are delivered.

She said ZEC is expected to complete the voter registration exercise within a short time with the initial stage starting with the training of so-called master trainers, who are expected to train others in using the biometric machines.

“Training will start simultaneously in all provinces where there will be voter registration centers,” said Makarau.

She assured skeptical opposition parties that the exercise will be transparent and is set to be conducted smoothly.

ZEC is expected to register 7 million voters ahead of the local government, parliamentary, senatorial and presidential elections.

The United Nations Development Program, which was expected to provide the money for the voter registration exercise, is now set to conduct a voter education program in Zimbabwe.

The Zimbabwe Electoral Commission (ZEC) says the government has provided $7,5 million for the purchase of Biometric Voter Registration kits for the registration of voters ahead of the crucial 2018 general elections.