ZIMBABWEAN authorities on Thursday 27 July 2017 resumed their onslaught against media practitioners after they arrested and detained three journalists working for the privately-run NewsDay newspaper for allegedly taking pictures during a clash between members of the public and some Zimbabwe Republic Police (ZRP) officers in central Harare. 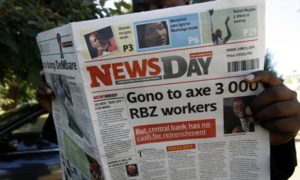 The ZRP officers arrested NewsDay journalists Obey Manayiti, Shephered Tozvireva and Abigail Matsikidze and Raphael Phiri, a driver employed by Alpha Media Holdings, publishers of the daily newspaper in the capital as they were taking some pictures during a clash between members of the public and some “spike” wielding police officers, who were harassing a motorist with the tyre deflation devices.

The ZRP officers later on released Tozvireva, Matsikidze and Phiri, who were all represented by Kuzivakwashe Ngodza of Zimbabwe Lawyers for Human Rights, without preferring any charges against them and kept Manayiti, who was also represented by Ngodza under interrogation and detention.

The ZRP officers claimed that Manayiti, who was visibly injured from the assault by the police, assaulted a police officer during skirmishes that reportedly broke out between some ZRP officers and members of the public.

Manayiti, who refused to pay an admission of guilty fine and had been booked for detention overnight pending being charged and appearing in court was later released on Thursday evening and advised to report at Harare Central Police Station on Friday 28 July 2017.