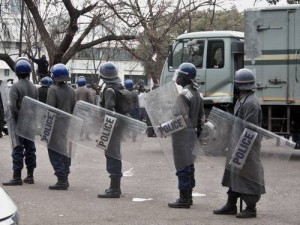 Barnabas Mwanaka aged 35 years and a resident of Harare’s Glenview high-density suburb was arrested on Saturday 08 July 2017 by ZRP officers and charged on Monday 10 July 2017 with murder as defined in Section 47 of the Criminal Law (Codification and Reform) Act (Chapter 09:23).

ZRP officers charged that Mwanaka together with some of his accomplices, who are reportedly still at large and mostly vendors trading around Harvest House, the MDC-T party’s headquarters mobilised themselves on Thursday 29 June 2017 and connived to attack some police officers from the ZRP’s Police Reaction Group, who were on duty escorting some officers from Harare Central Police Station’s Operations Unit.

The police officers from Harare Central Police Station’s Operations Unit were reportedly going to attend a “scene” of malicious damage to property at the Deeds Office in central Harare.

Mwanaka, the ZRP officers claimed, hit the now deceased Phiri with stones and “booted” feet, and the police officer had to be rescued by his workmates who rushed him to Morris Depot, where he was pronounced dead on arrival.

Mwanaka, who is represented by Tonderai Bhatasara of Zimbabwe Lawyers for Human Rights and who in his warned and cautioned statement recorded by ZRP officers at Harare Central Police Station on Monday 10 July 2017, denied committing the offence, is yet to appear in court.