The last few days I stayed in a humble hotel a few footsteps away from Zimbabwe House, on The Strand. 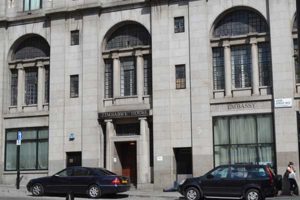 The Strand is one of London’s most “up there” streets, so Zimbabwe House 429 Strand sits on a precious address.

It is where the Zimbabwe High Commission is. Almost  exactly opposite it is The Savoy, one of London’s most celebrated hotels.

There are faded standing posters inside advertising the wonders of Zimbabwe.

It has a gloomy feeling. It seems the once majestic door that opens directly to the street is not used.

The steps are filthy. The next side door also has dirty steps.

On the weekends, some of London’s homeless sit there, and probably sleep there too.

Its tall glass front is covered in soot, and has not been washed in a long time.

Overall, it is a sad, wretched look. It is a mirror image of what Robert Mugabe’s long, brutal, and in recent years, incompetent and poisonous stewardship, has done to a once proud and prosperous land and people.

And yet, all is not lost. There are two models of African airline planes sitting on the window sill inside.

One is of South African Airlines. The other is of Ethiopian Airlines, arguably the most successful African national carrier today.

Further inside, a faint poster shows tell-tales of dead-but-not-buried Air Zimbabwe. And therein Zimbabwe accidentally leads us to a solution to Africa’s struggling missions.

Maybe we should give up the pretence of each having a mission in world capitals like London, Paris, Tokyo, and all gather in a few shared offices.

Instead of having a whole building, and battling with the gas being off during winter because of unpaid bills, and unwashed doorsteps, countries could just have a desk or two – and, therefore, two officials.

Of course, of itself, will not be a solution for everyone. Even with that arrangement, you will still have defaulters.

Many years ago, just after the 1994 genocide, and Rwanda had nothing, so to speak, the new Rwanda Patriotic Front (RPF) opened its London Embassy from inside Uganda House, at Trafalgar Square.

We were brothers, had fought many wars alongside each other, and relished victories together.

A diplomatic “come we stay” arrangement in a foreign land looked like the right thing to do. It proved that it was possible to do it.

But it went awry. MPs started making noise in the Ugandan Parliament that Kampala was a delinquent landlord.

Then stories started appearing that Ugandan diplomatic staff weren’t being paid, and they were sneaking over to the Rwanda floor to eat their sandwiches from the fridge, so to speak.

The one that really did it, was a report that the Ugandan mission had fallen so far behind in paying its telephone bills that the service provider cut it off.

The mobile phone was still prohibitively expensive those days. So, for some weeks, if the people in the Ministry of Foreign Affairs in Kampala (and others, too) wanted to speak to the Ugandan mission in London, they called the Rwanda mission landline.

The Rwandans would then send a messenger down the stairs to tap up the relevant Ugandan party, who would then climb up to speak on the phone.

The Rwandans were soon on their feet, and moved to their own digs in Marylebone, and presumably the Ugandans eventually became grown-up again.

But with the right “lead nation” (a Rwanda or Ethiopia), this shared accommodation arrangement might just save many countries national embarrassment.

When Nick Wachira, the MD of Oxygene Marketing Communications, was still the managing editor of The EastAfrican in the Nation Media Group (2012), he thought about this issue.

He saw the vision at Zimbabwe House as the future of African diplomacy.

According to Wachira’s count at that time, a then still highly profitable and Kenya Airways, was landing and taking off in far more cities than Kenya had diplomatic missions.

In his view, KQ was the “real” and most effective diplomatic arm of Kenya.

If the Kenya Airways managers in these areas were appointed to double us consular officials, Kenya would with one stroke expand its diplomatic reach considerably.

And it wouldn’t cost the taxpayer any more money. KQ would continue to pick up their tabs.

I guess that tells us all we need to know about why Mr Wachira is not a politician. Nevertheless, let’s keep the idea alive.