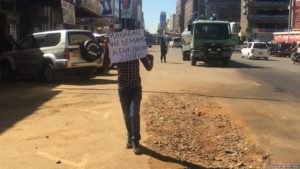 One demonstrator held a placard addressed to the electoral commission chairperson, Rita Makarau, July 12, 2017. The sign said, “Makarau, we demand a fair election 2018!!” Police descended on the protester and forced him into their vehicle.

Zimbabwe’s capital city came to a standstill for about four hours Wednesday as opposition protesters conducted running battles with police. Police used tear gas and water cannons to disperse the demonstrators, who were lobbing stones and even pieces of fruit they grabbed from street vendors.

VOA saw police kick or beat at least 20 protesters with batons before arresting them.

Police said the protest had not been sanctioned, as required by law.

One demonstrator held a placard addressed to the electoral commission chairperson, Rita Makarau. The sign said, “Makarau, we demand a fair election 2018!!”

Police descended on the protester holding the sign, Ralf Dzenga, and forced him into their vehicle. VOA spoke to him before his arrest.

He says he is protesting because “we are tired of Mugabe. He must step down from the throne. Do you hear me? He has too many years there. So many people are struggling because of Mugabe. I am telling you the truth.”

The opposition says as many 100 people were arrested and 25 more were injured. VOA could not independently verify that count with police.

The opposition called for the protest after the Zimbabwe Electoral Commission said it would not allow citizens living outside the southern African nation or those without proof of residence to take part in elections, expected between July and August of next year. 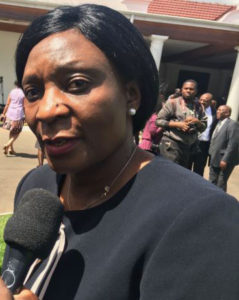 On Wednesday, Makarau maintained her organization, also known as ZEC, was not to blame for the decision.

“Our intention as ZEC is to register as many eligible voters as possible,” said Makarau. “Actually, it is our target to register all eligible voters for 2018 in Zimbabwe. It is not ZEC, it is actually the task of political parties that have representation in parliament. We usually throw this back to them and say: you are the lawmakers, go and make the appropriate law that we will implement. Ours is simply to implement the law after it has been made.”

In the past, the opposition in Zimbabwe has accused the country’s electoral commission of favoring the ruling ZANU-PF party. Earlier this year, it took to the streets calling for the commission to be disbanded.

President Robert Mugabe, who says he will stand for re-election next year at the age of 94, has scoffed at claims the electoral commission favors him. Mugabe is currently in Singapore for medical reasons.