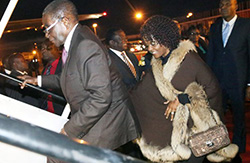 “President Mugabe on Friday left the country for Singapore for a routine medical check-up,” the Sunday Mail newspaper reported.

The paper said the veteran ruler is expected back in Zimbabwe midweek.

Mugabe’s medical trips to the Southeast Asia city state have become more frequent in recent years. His previous visit was in May, also said to be for a “routine medical check-up”.

Mugabe now walks with difficulty and sometimes dozes off during meetings.

In 2016, the government had to deny that he had died abroad during his annual vacation.

Mugabe has declined to name a successor and his ruling ZANU-PF party has been riven by factionalism for years.

Despite Mugabe’s advanced age, the party last year endorsed him as its candidate for the 2018 general elections.

The leader is not the only African president currently abroad for treatment for an undisclosed condition.

Nigeria’s Muhammadu Buhari has been in London since May 7, and his lengthy absence has caused political uncertainty in Africa’s most populous nation.

Angola’s President Jose Eduardo dos Santos recently spent a month in Spain for medical treatment and on Monday officials announced that he had gone back for what was described as a “private visit”.