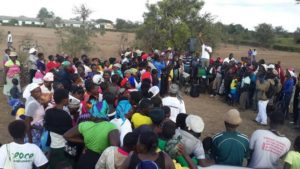 This came out during a Sports for peace tournament hosted by Heal Zimbabwe in Chipinge South on 29 July 2017. The tournament was organized under Heal Zimbabwe’s National Peace campaign, #13MilVoices4Peace, an initiative that seeks to encourage community leaders and members to uphold and pledge for peace ahead of the 2018 elections. The sports games were attended by 200 people, and six traditional leaders.

The tournament was conducted at Vheneka Primary school and saw 6 soccer and 6 netball teams battling out for the prestigious Peace cup. The participating teams were drawn from three wards of Chipinge South (wards 27, 23 and 22). The Youth sports games were organized by Wadzanai community peace club, a local peace club established by Heal Zimbabwe in Chipinge South. Village head Rukweza was the guest of honour at the tournament. In his address, Village head Rukweza underscored the need for community members to uphold peace and be tolerant of each other as the nation readies for the 2018 elections. “..The unity amongst community members during this sports for peace tournament must also be exercised from today going forward. We need to exercise tolerance amongst each other because peace begins with me, peace begins with you and peace begins with all of us”, he said.

As part of pledging for peace ahead of the 2018 elections, all the participating teams signed peace pledges which symbolize their commitment to uphold peace and intensify peace initiatives in the area. Mambarangwa Football Club won the peace cup in the soccer category while Pamamonya netball team won in the netball category.