The 105km #WalkForFreedom event which was run by Zimbabwe Human Rights Organisation (ZHRO) has inspired many including those who did not take part (Locally and Internationally). 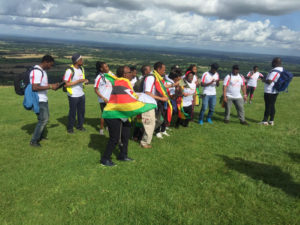 This was a very positive walk which spread a lot of awareness about the Human Rights situation in Zimbabwe. It distinguished itself by tackling a hefty 105km. The idea of a walk of that magnitude was to take steps toward spreading awareness and effecting change.The walk has allowed many diasporans to open up and advocate for reforms necessary for democratisation.

Demonstrations in Zimbabwe tend to be dismissed as riots or looting and are ruthlessly broken up by the regime. The most recent restrictive and repressive violence from the police has been to target the leaders of nonviolent social movements.

However, behind any political activism there has always been people willing to decide that it’s time to stand up to this repressive regime and publicly voice the dissent despite risk of imprisonment, death, or torture.

One such individual is the current Chairman of National Vendors Union Zimbabwe (NAVUZ) and founder of the original Restoration of Human Rights (ROHR) Zimbabwe Stendrick Zvorwadza.

Stendrick Zvorwadza sent a congratulatory message to the participants of ZHRO’s 105km walk that took place on 18 and 19 August. “I am inspired by the total commitment shown by the protesters who walked 105 kilometers in solidarity with the suffering Zimbabweans. ZHRO should continue to influence and champion similar initiatives in support of Zimbabweans who have had to suffer 37 years of dictatorship. My utmost gratitude goes to the organisers of this event and participants who braved such a tiring long walk in rememberance of fellow suffering citizens. My words can not express gold enough the commitment done by these protestors. We draw lessons from what ZHRO has done to lead such a nobble initiative. I did my mock walk for about 2km but felt the pinch, tiredness and pain. All i can say is aluta continua saints” – Stendrick Zvorwadza.

The only effective protest is that done peacefully. If it turns violent, the message that the protesters are trying to put across is distorted. The social media networks has virally replicated the 105km walk to send the message to the world.

Reflecting on the walk Mable Kayiya who participated in the walk said, “The walk of freedom to me was very much about commitment, endurance and perseverance. I kept repeating in my head ‘take your shackles off my feet’ as I pushed on and on. We as a nation of Zimbabwe are shackled to oppression, to poverty, to abuse by a mafia system that has robbed us of life.  I will continue my walk for freedom in different ways for a better Zimbabwe, for a better future and against tyranny and exploitation. With your help we can amplify our voices as we raise awareness and demand the walls of oppression to fall. I may be nursing my wounds, pains and aches from the walk but it’s given me more courage to demand freedom. It won’t stop here. I’m only getting warmed up. My freedom is non negotiable. I demand this right” -Mable Kayiya

Irrespective of the choice of medium for communication the ultimate strength of a campaign is determined by the will of activism. For all that it does, a protest is no silver bullet when it comes to social and political change, however, we have also seen examples of where activists have managed to bring about the desired political results. The Arab awakening in one such example.

“I took part in the 105km Brighton to London walk. It was one of the best physical thing I’ve ever done. It was an incredible experience and I met some truly inspiring people Rev Canon Mutete, John Burke to name a few. My reasons for walking was to raise money to help those who are standing up against injustices in Zimbabwe and also to bring awareness  to the wide world about the devastating  situation in Zimbabwe” said Hillary Chikomba.

Nancy said, “There were many dark moments when my faith in my country was sorely tested that is when i wanted to give up but i came to the realisation that I would not and could not give myself up to despair. i had to take responsibility of my actions if the dream of a better Zimbabwe has to be fulfilled”

“This walk made me a better person that i am today because it liberated me from my own fears of challebging the corrupt and ruthless government in my country Henceforth I will devote myself to the liberation of my people; instead, I simply found myself doing so, and more until a better Zimbabwe is manfested” -Nancy Mukurira.

Fungai Chiposi of Citizens ZW also sent a message saying “I wish the event a success. If I was there I would join in.”

“I gave my life die or not die on the 18th -19th August, 105km walk for freedom was not easy. Struggle is there. lt was a painful journey, walking from Brighton to London. My legs where swelling, developed blisters under my feet, but it could  not stop me from walking and fighting for freedom in my country. Climbing the hills, walking in the forest the whole night, fight for my freedom for my own country. I hope the Mugabe regime is going to hear about us and the massage that we have for him. Enough is enough. l am not going to rest until we defeat this Mugabe regime. I hope the whole world heard our cry” said Maruwiza Nkhambala.

It is a privilege to utilise the freedom to speak and to stand up for what we believe without being punished. Many Zimbabweans and groups throughout the UK are taking advantage of this freedom, protesting for a better Zimbabwe.

This shows that although living in the comforts of democracy, Zimbabweans are paying attention to what is going on in our country. The response afforded to the ZHRO 105km walkers on the ZimFest stage was awesome. There were wild cheers as Rashiwe Bayisai jumped up and down after enduring a 28 hour trek.

Former ZBC presenter, Ezra Tshisa Sibanda congratulated ZHRO and the walkers in a video massage. Peaceful protests do send a massage, draws the authorities and citizens attention to the causes that may otherwise have been ignored.

Although protests can divide as well as bring people together, the regime is always going to know the citizens opinions. The main goal of these protests is to shift the Zimbabweans think and feel about our situation. Most importantly protests allow those who do not have a voice to be head. And especially in its nonviolent form, it is certainly a positive way to make a stand.