The undignified flight from South Africa of the disgraced Zimbabwean First ‘Lady’ after viciously attacking a young woman in Johannesburg has made her an object of derision throughout the world. 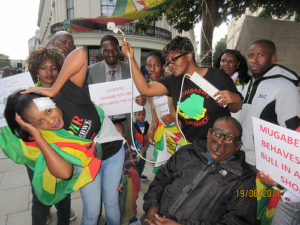 Grace’s crazed attack tells a lot about her sense of being above the law – fostered by the impunity with which the Zanu PF elite plunder and abuse Zimbabwe and her people.

Grace lost her cool when she went to see her two dissolute sons at a Johannesburg hotel and apparently found yet another party going on. She predictably exploded with rage, lashing out with an electrical extension cord leaving a 20 year old model Gabriella Engels bleeding from head wounds. Grace’s ten or so bodyguards stood back and did nothing.

Ms Engels said later that she was offered a bribe to keep quiet and told to name her price but refused. When police began criminal investigations President Mugabe appealed to his friend Zuma to grant retroactive diplomatic immunity.

Zuma of course has form in flouting the law as demonstrated when, two years ago, he let the Sudanese President Al-Bashir escape being sent to the International Criminal Court by allowing him to be spirited out of South Africa.

But Grace may not be off the hook. A group supporting Ms Engels say that if the South African authorities do not hold Grace to account they will help a private prosecution. This would cause serious embarrassment if Grace was to visit her new acquisition – a luxury house in Johannesburg costing R45 million (about $3.5 million).