JOHANNESBURG — Zimbabwe’s first lady has requested diplomatic immunity for an incident in which she allegedly assaulted a young woman in Johannesburg. The incident has sparked public outrage in South Africa, and could also complicate relations between the neighboring countries. 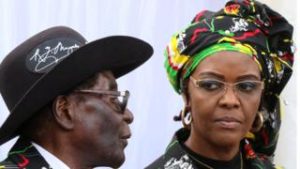 The accusations that Zimbabwe’s first lady Grace Mugabe assaulted and badly hurt a young woman in an upscale Johannesburg hotel this week have grabbed international headlines.

The incident has also created a major diplomatic headache for two neighbors who have delicate relations.

Zimbabwe and South Africa are major trade partners. But in recent years, instability and economic woes have sent millions of Zimbabweans fleeing across the border.

They form a loud and angry Diaspora that almost unanimously calls for South Africa to condemn President Robert Mugabe, who has ruled Zimbabwe since 1980.

This event has thrown these issues into sharper focus. Here is South African international relations spokesman Clayson Monyela, when asked what the government plans to do:

“We have been advised not to comment on this thing any further,” he said.

His department has the job of deciding whether to grant Grace Mugabe’s request for diplomatic immunity, which would spare her from prosecution.

The first lady failed to appear before police Tuesday to give a statement.

On Thursday, South African prosecutor Gerrie Nel, who has been nicknamed “the Bulldog”, said his organization, Afriforum, would provide legal representation for the alleged victim, 20-year-old Gabriella Engels.

He says Mugabe’s request for immunity should not be granted, on the grounds that initially, she said she was visiting South Africa for medical treatment and not, as she now says, to attend a regional summit alongside her husband.

“It is not automatic. There are lots of prescriptions and things that should be followed before somebody can claim immunity,” he said.

Could Grace Mugabe be put on trial? Zimbabwe scholar David Moore of the University of Johannesburg says South Africa’s government is in a very sticky position, in part because Mrs. Mugabe has positioned herself to be her aging, ailing husband’s successor.

“Now if Grace Mugabe is disgraced through this event in South Africa,” he said. ” You would have a very unpopular leader of a party, and a very temporary leader, because she is volatile, as we can see. So that would lead to more uncertainty on the borders of South Africa. So South Africa now has to worry about how they handle this situation with Grace Mugabe, how this will affect politics in Zimbabwe.”

South African officials say Grace Mugabe is still in the country, but have not given her location. Her husband Robert arrived in the country late Wednesday to attend the summit of the Southern African Development Community.