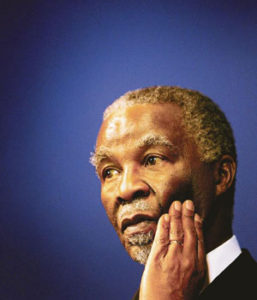 Speaking at Ivory Park Secondary School, Mbeki said while he was not completely informed on the scandal surrounding Mugabe, he was optimistic that the alleged assault would not affect the relationship of both countries going forward.

“I don’t know much about the case but it really shouldn’t affect our relationship with Zimbabwe,” he told News24 before he was whisked off by his bodyguards.

The 52-year-old wife of President Robert Mugabe is accused of beating model Gabriella Engels, 20, on Sunday evening at a Johannesburg hotel where her two sons were staying.

Engels said she suffered deep cuts to her forehead and the back of her head, and on Monday, she registered a case with the police alleging assault with intent to do grievous bodily harm.

The alleged attack threatened to spark a diplomatic tiff between the neighbouring countries, which have strong political and economic ties.

Grace Mugabe allegedly arrived at the Capital 20 West Hotel with bodyguards and accused Engels of partying with her sons Robert and Chatunga, who are both in their 20s and live in Johannesburg.

Pictures on social media appeared to show Engels bleeding from her head after the alleged assault at the hotel in the upmarket business district of Sandton.

Engels said she had been attacked with an electrical extension cord.

President Robert Mugabe is said to be on his way to the country.

Initial reports indicated he was coming to settle the matter; however, other reports indicate that Mugabe will be attending a SADC summit meeting of heads of state to be held in Pretoria.