...Smiling for foreigners, cops are a menace to locals in Vic Falls 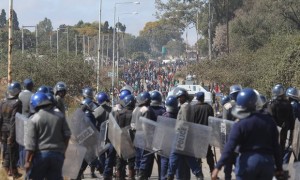 VICTORIA FALLS-It is a town often described as a paradise and the Zimbabwe Republic Police (ZRP) even teaches its members to smile for visiting foreign tourists. But for locals, Victoria Falls cops are spreading fear, going to the extent of using torture to punish women who dare walk at night. Zibusiso Moyo and Philile Dube survived the ordeal at the hands of ZRP members from Victoria Falls, but barely. In the case of Moyo, she suffered a miscarriage as a result of the torture.For more than a month, Moyo has been battling to recover from life threatening injuries as the ZRP refuses to release information necessary for her treatment. She was badly burnt on her backside and private parts after being forced to sit on an “unknown acid”. Zimbabwe Lawyers for Human Rights (ZLHR) has taken up the case to force the ZRP to divulge information on the substance they used to torture Moyo, as these are crucial for her survival.

Moyo had returned home for holiday from South Africa where she is employed when a group of ZRP members pounced on her during the early hours of 27 June. After forcing her into a truck, the cops ordered Moyo to sit on a substance they now claim is an  “unknown acid”.   Doctors who need to know the identity of this “acid” to correctly determine treatment are now in limbo due to the refusal by the police to  divulge information.“It is only prudent that a forensic examination on the substance be done and by now our client and doctor/ hospital ought to have been advised of the nature of the hazardous substance so that she gets proper treatment and/ or take appropriate steps as far as her health is concerned,” said her lawyer in a letter to the police in July, demanding information on the identity of the substance.

Moyo and Dube are represented by Thulani Nkala, a ZLHR member with Dube and Company in Victoria Falls. “She complained that her buttocks were being burnt and tried to resist but the police officers ordered and forced her to sit, and retorted that it’s salt (she was sitting on) and no one was ever hurt/burnt  by salt. She tried in vain to escape from the searing burning pain,” wrote Nkala.

Police continued with their errands around the town before proceeding to the police station, where it was discovered that Moyo was badly injured.

“By this time she was severely burnt and she removed her clothing in front of those present.  “It is at this juncture that police realised that contrary to their stubbornness our client was in serious danger,” said the lawyer, adding that this was the only time police decided to take her  to hospital. At the hospital, police first claimed that “it was salt that injured her and later said it was an  unknown acid”. Moyo cannot wear a garment from the waist downwards and has to endure the agony of lying on her stomach since her backside was burnt.On their part, the police said they are more concerned with charging Moyo with an unspecified criminal offence.

The officer in charge of Victoria Falls police,  only identified as J. Nkomo, responded that investigations had established that the ZRP members had no criminal intent when they tortured Moyo.“The issue is not being swept under the carpet,” Nkomo wrote on 7 July. Nkomo’s boss, Chief Superintendent Jairos Chiwona, the officer commanding Victoria Falls district, said Moyo would face unspecified criminal charges once she is discharged from hospital. Nkala described the move as a “bolt from the blue”.“We suspect it is your office coming up with the charge after receiving the notice of intention to sue for unlawful arrest among other things.

We request particulars of the charge,” said Nkala. In the case of Dube, Nkala said her client was unlawfully arrested and detained by some ZRP officers on the same day that Moyo was arrested and sustained burns on her hands. After the unlawful arrest, she was detained inside a police van, the vehicle floor had salt like substances which turned to be hazardous. While in the vehicle she complained of burns on her buttocks but four police officers ordered and forced her to sit on the vehicle floor and retorted that it was salt and no one was ever hurt/burnt by salt while a female police officer hurled insults at her,” reads part of the notice of intention to sue.ZLHR said it will continue pursuing the matter, and similar cases, to ensure justice is done.