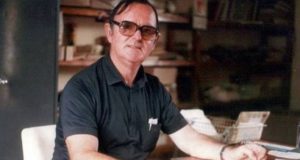 An Irish Franciscan friar has been posthumously awarded the highest honour the Zimbabwean government can bestow on a foreigner, The Royal Order of Munhumutapa.

A native of Ballinacargy in Co Westmeath, Fr Paschal Slevin, who died in May aged 83, was being honoured by President Robert Mugabe’s government for his work for the people of Zimbabwe.

He joins six others in the Royal Order of Munhumutapa, five of them native states-men who led their African nations to independence.

A citation penned by vice president Emmerson Mnangagwa praises Fr Slevin for his anti-racist initiatives in local Catholic schools in 1966 and 1971.

These include the building of primary and secondary schools at Mt St Mary’s Mission in Wedza.

Here many students were subsidised by a special sponsorship fund established by the Franciscans under Fr Slevin’s leadership.

This enabled many to further their education at third level, qualifying them to take up key positions of influence in the new nation.

Fr Slevin’s attitude to the Liberation struggle was remembered as a pragmatic one.

The priest found himself caught between the laws laid down by the Rhodesian Regime and the demands of the liberation struggle.

The friar was also remembered for his compassion for his students in the schools he taught in.

He knew that many of the students from his schools were absconding to join the combatants and frequently delayed reporting them until they were safely on their way.

He facilitated staff from the hospital in Wedza to bring medical supplies to injured combatants after curfew.

In 1977, the Smith regime closed his schools, and expelled Fr Slevin and fellow-Franciscans from Rhodesia.

For the next decade, leading the local branch of the Franciscans, he educated former guerrilla fighters and helped develop the local rural economy in Wedza, building a dam and grain storage silos and establishing a farmers’ co-op.

“While recognising Paschal’s sympathy for the cause of liberation, it must be added that the award bestowed on him by the Government surely includes recognition of the efforts of many priests and religious, native and foreign, during this time of nation building.

“The bestowal of this great honour by the Government of Zimbabwe is a fitting one in many ways and a wonderful sign that Paschal Slevin’s dedication to the cause of peace and justice for that country will not soon be forgotten,” said a spokesperson for the Franciscans.

Fr Slevin’s family told The Irish Times that they were delighted with the award bestowed upon their uncle for his life’s work.

“It’s a great honour for Paschal and it’s a pity he’s not still with us to share in the delight. It’s a fantastic honour for a man who spent his whole life doing the most incredible work.

“Unfortunately, he passed away in May of this year, but as anyone who would have known him, he was a man who work tirelessly for others,” Carmel Slevin said.

Two of Fr Slevin’s nieces and representatives of the Franciscan order from both Zimbabwe and Ireland will be among those attending the Defence Forces’ Day ceremony.