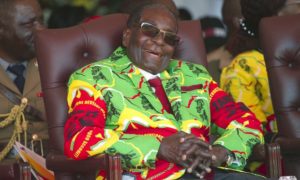 Following a clear defeat at the hands of Morgan Tsvangirai in 2008, Robert Mugabe withheld the announcement of results as he planned a way to robbing Zimbabweans of sweet victory and force himself back onto the people of Zimbabwe. The strategy involved misrepresenting the results to allow a re-run of the election as under Zimbabwean law the winning candidate in a presidential election has to win by more than 50 percent of the vote, and then hire some paid Zanu PF youth, paid from the government payroll, to kill some targeted  MDC campaigners and unleash violence on the electorate so as to instill fear into the electorate so that they vote for him out of fear of losing their lives if he (Mugabe) did not win the election. And true in deed, hundreds of MDC campaigners were killed, with some being abducted from their workplaces in broad daylight. It was really chaos.

Mugabe pretended to dissociate with violence youth behavior at a rally in Lupane two weeks ago, yet the same people he was pointing out at who are violent are the same people who he is reinstating to murder opposition supporters in the run up to the 2018 election.

The United Nations and the African Union must never be fooled by Mugabe’s antics and should tackle Mugabe on violence. Do not leave it until it is too late to save lives of innocent Zimbabwe.