Madness is when Grace Mugabe and George Charamba both pretend to be what they are not. Not long ago, George Charamba, the presidential spokesman and secretary for information, “disclosed” to the world that indeed, he was the acerbic character known in media circles as Nathaniel Manheru, a character foolishly and blindly pro-ZANU PF. But, of course, we all knew that already! 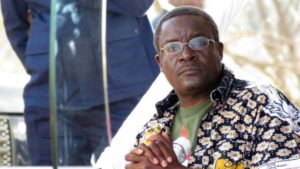 On the other hand, Dzikamai Mavhaire, in one of his best straight talking moments, gave Grace Mugabe the most befitting nickname, Marujata —  the worst name or label for a woman in the traditional African context — a person known for causing confusion, fighting, division, hatred, at times even killings in the village. Marujata is the epitome of an uncultured woman who can easily split families by setting brother against brother. As well, she is generally a character of loose morals.

It is events of the last few days that have brought these two names to the fore. At a youth interface rally (euphemism for succession rally) in Chinhoyi last weekend, Grace Mugabe, in typical Marujata style, dressed down George Charamba in front of youths and cameras. She asked Charamba to stand up, and he did. She then gave him a lecture on how junior he was to ministers and what his role was in government. He was also reminded that he was not a politician and therefore, must keep away from politics. She all but said “You and I are opportunists who don’t deserve to be where they are”. How else can anybody interpret her reference to what she was before she became First Lady and also to what Charamba was, many years back, before he became Nathaniel Manheru and the presidential spokesperson?

While Grace Mugabe holds a junior political position by virtue of being chairperson of the women’s league, the fact remains that she does not hold any cabinet or government position. If the truth be told, George Charamba understands the workings of government way better than Grace Mugabe can ever imagine. Of course, this is not to say Charamba is a good man, he is a political moron from the old school who invariably confuses pleonasm and prolixity with intelligence.

For threatening ministers and demonstrating levels of insubordination never seen before, Charamba deserved to be dressed down. However, the person who dressed him down is one who is least qualified to do so. As secretary for information, George Charamba is a senior civil servant who, in a functional democracy, would have been fired many years ago for dabbling in politics (and so would some generals for the same reason).

In a typical democracy, Grace Mugabe would have been silenced by now for she is now behaving like a rabid dog rather than a first lady. She behaves as if she is the sole architect of the hierarchy in the government of Zimbabwe, the only one who knows who is senior to who, who should report to who and who should not say what. What nonsense!

Sally Mugabe, our revered First Lady had African values. She knew her bounds. She was always a positive influence on Mugabe and in our society. If anything, Zimbabwe would probably not be in this mess if she was still alive. Marujata has lived up to her name! She has divided the family and set brother against brother, sister against sister. She does not give a toss about the damage she is causing as long as she and her immediate family members have unfettered access to unlimited privileges which they dangerously confuse as a right in perpetuity.

Should we come to that curious point in time when it becomes a matter of survival pitting Grace Mugabe vs Emmerson Mnangagwa, only a fool would imagine that Grace will prevail. Grace is the real “chanana” not Joice Mujuru as we heard before. Beyond the presidential bedroom, Grace has no power at all, of her own. Everybody understands that. If she had any semblance of intelligence or decency, she would be spending most of her time packing her bags and planning her move to Dubai, Singapore or Hong Kong, probably for good. Going underground would have been the most reasonable thing to do but it is now too late, she has blown that chance. She has stepped on too many toes and very few will ever forgive her. Whatever she is doing now is either public posturing or genuine stupidity. It is likely to be both!

As for Charamba, he is a civil servant whose salary is paid by the government, just like a teacher in Nembudziya or a nurse in Chibwedziva. God knows what makes him think that he is now a super minister of some sorts. If Zimbabwe was like other normal countries, Charamba would have been relieved of his duties a long time ago. He no longer qualifies to be a civil servant. He talks as if he works at ZANU PF Head Quarters.

Marujata has carelessly set the whole village on fire. Unless firefighters move in fast, everything is going to be razed to the ground. It is now a matter of the First Family on one side with the army and war veterans on the opposite. The crucial point will be when the army and the veterans finally come to their senses and decide to stand with the people, the same people who made them what they are today.

It would appear that the empire is finally crumbling and the emperor is totally naked but none of his sons or daughters is brave enough to tell him so. We are heading for dangerous or interesting times. Either way, change is imminent, exactly what Zimbabwe needs

Moses Chamboko is a pro-democracy activist and interim secretary general of Zimbabweans United for Democracy (ZUNDE). He can be contacted at [email protected]